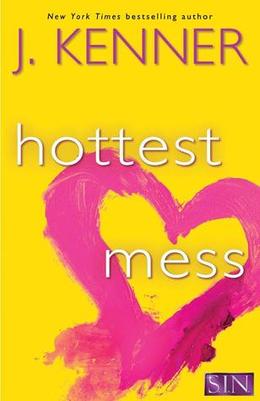 Hottest Mess is the second book in J. Kenner’s S.I.N. series. It focuses on Dallas and Jane, two siblings who have a super spicy relationship and a dark past. Jane spends most of the book just wanting to be with her brother without having to hide it and lamenting over the girls who do get to touch him in public, and Dallas spends it trying to hunt down the person who had them kidnapped as teenagers and also kicking the ass of a bunch of other kidnappers while he’s at it.

Sponsored links
I didn’t read anything else on it before starting, and at first I thought it was the first book in the series. Then it became obvious that I was missing something. A lot. In particular, they kept alluding to the first time they had gotten together, and I was like I gotta know how that happened. I almost wanted to read the first book and find out, but I was having a little moral dilemma.

Then I found out that Jane had been adopted as a child, and that actually they weren’t blood siblings at all. Am I the only one who thinks that their love isn’t that taboo, then? Like, yeah they grew up together—but isn’t that like the whole plot of Wuthering Heights? Get Heathcliff a tan and a slightly better social standing and you’ve basically got Dallas Sykes. And I think we were all rooting for Heathcliff *cough*Tom Hardy*cough* to get the girl.

I just don’t think their “taboo love” is enough to drive the plot. And I think the author knew that too, otherwise she wouldn’t have thrown heaps of sex and Dallas’ little spy project in there to fill in the gaps. Maybe the first book was better in that respect. The actual build up to the getting together might have been quite interesting. But I swear to god constantly reading about how Dallas was the guy with the golden schlong and the King of Fuck and how much this upset Jane actually made my brain melt a little bit.

But I didn’t not enjoy this book. J. Kenner clearly knows a thing or two about a thing or two when it comes to writing steamy sex scenes. And, in general, I found the writing quite easy to get behind. I think I just wanted a little more from the plot. When you’re dealing with a steamy novel about a forbidden love and there’s a mystery to be solved, you shouldn’t be getting bored after the first couple of chapters. I think, for me, I just didn’t understand why they were in love. Apart from the fact that they had stupidly hot sex, I wasn’t really feeling the connection. I didn’t much care for either of the characters, and I didn’t understand why they cared for each other.   It ends on a cliffhanger, which normally gets me all jazzed up about the next book. I was practically frothing at the mouth after every of Karen Marie Moning’s Fever books. But with this? I could take it or leave it. You shouldn’t feel “meh” about a cliffhanger. You just shouldn’t.

I would hands down read something else by this author, I just think I would give the series a pass on a personal level. Would I recommend it to someone else? Absolutely. Probably someone who is a little bit more scandalized by the relationship between the two protagonists, or someone who just wants a filthy read to get them all hot under the collar. I get more engaged by the plot and the buildup of sexual tension, so it was just a swing and a miss for me.

Final rating: ⅗ stars. Would recommend. Would not read again.