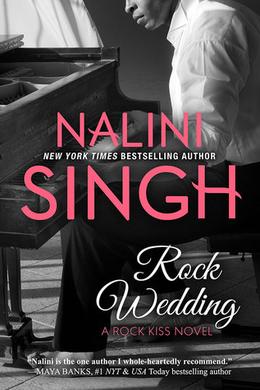 This is only my second Nalini Singh book, but I’m already picking up a couple expectations when I pick up one of her novels. The first is that the writing is going to be solid, and the second is that it’s going to be steamy as hell.

Sponsored links
Rock Wedding is the fourth in the Rock Kiss series, and from what I understand is meant to draw together all the threads of the series in a nice tidy little package. Though I haven’t read the three previous books in the series, I believe it accomplishes this feat. The end is definitely better than the beginning, I’ll tell you that much.

In Rock Wedding, Abe and Sarah are a married couple who break up because Abe’s a complete douche canoe. He’s a musician who struggles with addiction, and he lashes out at her so badly (with his words—never with his fists) that she leaves him. They get divorced, she moves on to another guy, the other guy is a jerk too, she breaks up with the other guy, and then her and Abe get back together.
I feel like I vacillated a lot over whether I liked this or not. To start, this book is really only the Sarah and Abe getting back together part of that whole tale. The first series of events is told in about one or two chapters, and the rest is just him being sorry.

I didn’t read the blurb at first, so I had no idea what to expect. I was way more interested in reading the book when I dove into the first chapter and Sarah was talking about how much she loved her husband Abe, but how he didn’t love her back and that was okay. I expected an entirely different novel. I was thinking maybe she’d grow as a person, put her future happiness ahead of her current fears, and go find someone who would love her back. Or, I thought the novel could be about her putting herself first, moving on, and then them finding each other after a long time apart and him actually falling for his wife.

It was similar to the second scenario, but it was more like he did something awful, she left with the intent on coming back if he asked her to, but he never asked her to. He realized much much much later that he owed her an apology, but by then she was with Jerk #2 so he decided to be noble and leave her to it. But then, after she ditches Jerk #2 and becomes an independent woman with her own business and a dog, Abe comes back into her life and she basically just loves him again.

Yes, yes, I know. She tries to put distance between them, but the love is still there. Here’s the thing: I just don’t buy that. Call me a cynic, if you will, but I’ve had a less glamorous but similar situation happen to me. And the thought of the one who done me wrong coming back into my life? It makes me feel ill. Someone who has hurt you that deep, cut you to the marrow of your bones, is not an easy person to let back in. For me, it’s impossible. For others, maybe not so much.

But just from a reader’s point of view, with this book in particular, I did not have time to heal from Abe’s wounds. One second he was saying horrible, unforgivable things, and the next Sarah was reflecting back on the past two years of her life. And let me tell you: at no point in this was I rooting for Abe. I rooted for Sarah for a bit, even though I didn’t really relate to her, but not Abe.

Other people have reviewed this book and loved it. They think that Abe is super dreamy and they loved his and Sarah’s love story. To me, there was too much angst for it to be a heartwarming love story, but not enough angst or development of character (on paper, not just in flashbacks) for it to be a good second chances love story.

All that being said, the negative part of this review is wholly based on my opinion. Maybe you’re the kind of person who will relate with Sarah, and who will cheer on Abe on his path to redemption. You’re going to love this book then. All the elements of a strong romance novel are here: complex characterization, excellent writing, chemistry, steaminess. What wasn’t jiving with me here was the plot. But, if after reading the synopsis you think it sounds groovy, then you may have just discovered your new favorite book.