The Color of Love (Romance #13) by Radclyffe 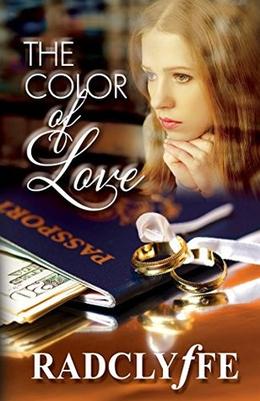 If you’ve never read one of Radcylffe’s books, allow me to paint an introduction. First of all, the writing is both gentle and enveloping. If she’s fully on her game (and she is so prolific that inevitably some of them are less successful), then there are few better writers for nailing a character’s inner life. She writes in tropes, as most romance authors do, but usually manages to reinvent the tropes enough to tinge the familiar with the adventurous. She usually employs the butch/femme pairing, and this book is no exception.

Sponsored links
Color of Love is about Derian, a race car driver from a wealthy publishing family, and Emily, an acquisitions editor at their publishing house. They’re introduced when the matriarch of both the family and the company, Henrietta, has a heart attack, and both rush to the hospital bedside. Derian is the butch in this scenario; strong, sexual, powerful. When we meet her at a race in Monte Carlo, she has sex with a stranger whose name we never know. Emily, on the other hand, is a quiet woman with secrets and baggage who hails from Singapore and still has family there. The two should be chalk and cheese, but instead their chemistry is instant.

While Henrietta is recovering, Derian’s father whom no one likes tries to mount a hostile takeover of the company and Derian needs Emily’s help to thwart it. As the two work closely together, the insta-love chemistry develops into a realized happily ever after.

If you’re looking to branch out into F/F romance, but aren’t sure where to start, I’d recommend this book. It’s a great example of the genre, as well as being exceptionally well-written. Whereas a lot of butch heroines tend to be one-dimensional, Derian’s emotional journey and inner life are highlighted here and the effect is striking. I also really enjoyed her views on the state of publishing and the commentary she was able to offer as an outsider when she has to assume control of the operations. I love insider baseball type stuff and so that scratched that itch for me.

However, while Derian was a full character, I found Emily to be a little undercooked. Instead of exploring what it could mean to be an immigrant of Asian descent, Emily is instead a bland incarnation of a “foreigner” and I have no real understanding of what makes her experience different. When we meet her, there is concern over her legal standing in the U.S. I’ve been an immigrant with concerns over my visa - there’s a lot of angst, a lot of emotion, a lot of a lot that goes into that process and it was largely skimmed over here. If she wasn’t going to engage with the pieces of the character that she highlights, I wish the author would have not included those facets in her character description.

Also, quick minute, I hate the word “lover” to describe a paramour. It conjures up the old SNL skit between Will Ferrell and Rachel Dratch and I just cannot. Skeeves me out, but that’s totally personal I know.

The last several of Radclyffe’s books have gotten criticism for being slightly stale, but overall I think this is a return to form. I recommend this for anyone who likes instant attraction, but a slow burn romance.