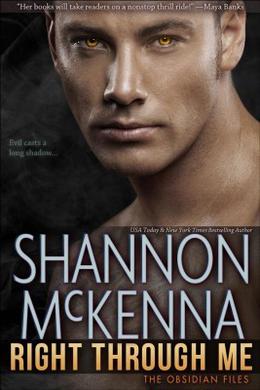 Hot. Damn.   This book captured me right off the get-go. Like I didn’t stand a chance. One sentence in and I was lost, dragged into Caro’s sensual dance in the exact same way that Noah was. Okay, okay. Back it up. What am I on about? Your new favourite book, of course.

Sponsored links
Right Through Me is the first book in a series about enhanced super soldiers who escaped the people who turned them into what they are and are now pursuing normal lives....and love? Except, well, there’s nothing normal about Noah Gallagher. Even when he’s not doing freaky shit with his eyes, he’s still a captivating man and a powerful CEO. And then there’s Caro Bishop, part-time sexy belly dancer and full-time lady on the run. After Noah’s little sister buys him a belly dance for his birthday, he crosses paths with Caro. And their lives are never the same again.

First, I think it’s important to commend Shannon McKenna on writing a compelling hook for the story. I doubt anyone who picks up this book and starts reading stops of their own free will. Just as you’re starting to get tired of the intro from Noah’s POV, you end up in Caro’s head and it’s a whole other ball game. And let me just say: I love Caro.

I think the characters were my favourite part of this whole tale. Caro is hilarious, sassy, strong, vulnerable where it counts, and doesn’t put up with any of Noah’s shit. I actually smiled while reading through most of her POV. She’s so savvy about dealing with her past (most of the time) and I genuinely cared about what happened to her. And there was a lot happening to her. Since she was framed for murder, not only does she have to hide from the law, but she also has to hide from the person who framed her. And that person, by the way, is a bit of a jerk.

Noah is intense and sexy as hell. He’s the emotionless machine of a man with a heart underneath that we all can’t help but fall in love with. And he’s dangerous, which just adds more fuel to that particular fire. I’m not much of a swooner, but I would probably do a swoon or two in his presence. Maybe six. Six swoons for Noah.  The side characters, as well, were excellent. There are a real wealth of characters to draw on for future novels, and I look forward to see who gets paired up next. I wouldn’t say the villain was flat, per se, but perhaps a little overly sociopathic. He accomplished the task of making me cringe, that’s for sure. It’s not something I’ll deduct marks for, certainly. After all, it’s my own damn fault that I always fall for the villain, just like Dylan Sanders from the early 2000s Charlie’s Angels movies. Yeah, maybe this villain was no Creepy Thin Man, but I was still rooting for him until it became obvious that I could no longer root for him. Then I just kind of hated myself for rooting for him. But that’s okay.

I found the plot incredibly interesting as well. The way the enhancements were described made me want to gobble up the pages to learn more. I don’t know if the whole soldier enhancements thing has been done before, but if it has I don’t know about it. It all seemed very fresh to me. Fresh as a loaf of bread being lovingly pried from my mom’s bread maker.

I wouldn’t say the writing was mind blowing, but it was very good for the genre. There weren’t any points where I was dragged out of the story because I’d stumbled over a block of clunky writing, but I also wasn’t doing a slow clap at the end of every chapter. I enjoyed McKenna’s style though, and I’m hella adding all the rest of her books to my to-read pile. Her steamy scenes were steamy with a side of steamy. And numerous. After a spicy build up, you’re certainly not left wanting.

I am incredibly happy with the way things are going so far in this serious. It’s action packed, it’s fun, it’s a goddamn ride. And there’s more to look forward to. Ultimately that’s the best combination of things in a romance novel. So strap on in, ladies and gentlemen. This bronco’s kickin’ it with my rating of 5/5 stars.