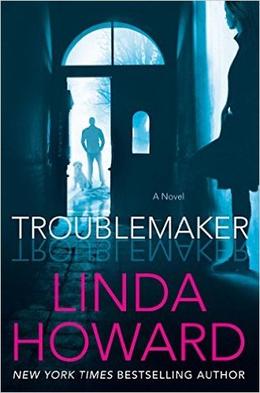 I had a couple thoughts about this book just based on the cover. Of course, I was intrigued because I saw a dog. The best novels, in my opinion, always have dogs. Other than that though, it looked a bit creepy. Am I the only one who got this impression? I get that it’s a romantic suspense novel, so it’s a more appropriate cover than a pair of grinding lovers, but still. Something about it has irked me enough to write all this about it. Surely that counts for something.

Sponsored links
As far as first impressions go, I was pretty much spot on. The novel was all dog and awkwardness. Linda Howard may have actually cured me of my love of fictional dogs. Tricks, with her “beautifully shaped golden head”, just didn’t strike my fancy. Next time you meet a golden retriever, compliment it on its “beautifully shaped golden head” and see what kind of look its owner gives you. Commit that expression to your memory, and you’ll know how I looked while I read this novel.

Troublemaker is the story of Tricks the dog, who lives with her owner, the police chief of a small town, Isabeau “Bo” Maran. Tricks is pretty good at understanding what people say, so she and Bo have lots of little conversations, and she keeps Bo company so that Bo don’t need no man. Or friends. Except then some guy named Morgan Yancy shows up, after getting shot or something, and Bo starts talking to him too. After that they’re both put in trouble because somebody is after Morgan. Luckily, they don’t run out of dog treats.

In all seriousness, I get it. If you get me started on the subject, I will tell you—in detail—how my dog spends his day. I will tell you what expressions he pulls, and the things he likes and dislikes. I will regale you with tales of the silly things he does on walks. But I don’t tell you these things, because you don’t ask. At most, I will show you a picture of his handsome face and we will both move on with our day. Howard did not show us a picture of a dog. She sat us down and showed us a damn Powerpoint.

As for the rest of the story, it failed to enthrall me. While it did open with some action, the suspense was mediocre, and the mystery of who Morgan’s enemies are wasn’t all that interesting. I really didn’t care about him. The greatest mystery of all was posed by Bo herself. “Olives? Did men eat olives?” If that had been the mystery explored for the next dozen or so chapters, it might actually have worked better. Come to think of it, I can’t recall ever seeing a man eat an olive. If they do eat olives, do they have a natural preference for Kalamata or black?

I didn’t feel enough spark between Morgan and Bo to anchor me in the story romantically, either. I just didn’t buy it. Why would Morgan, the badass with the gun, be interested in Bo—who thinks the word “hell” is a swear word? I realize that opposites are supposed to attract, but what could they possibly have in common besides the fact that they live together for a bit? When they get out into the real world, will their relationship even last? Because I couldn’t find anything within their interactions that would lead me to think there was anything more than situational sexual tension between them. You know, like when you’re stuck in an elevator for three hours with Dave from Accounting and you’re thinking, “Hey, Dave’s got a little some’in-some’in underneath all that body hair.”

I haven’t read any Linda Howard before, but from what I understand this book is not representative of the quality of her stories. I don’t know how something like this could come from a good author though. She missed the mark in so many ways: bland plot, stale dialogue, too much quirkiness (did you know the book had a dog in it?), and an unsatisfying romantic element. I also found the writing clunky and sometimes downright weird. (Need I remind you of Tricks’ “beautifully shaped golden head”?)

The one redeeming quality was that I liked the town. Maybe the supporting characters and landscape weren’t that great, and I was just happy to read about people other than the three main characters (Bo, Morgan, and Tricks). While the kitsch element of Tricks and her adorable ways was played up to the max, the depiction of Bo’s little town was surprisingly realistic.

I haven’t read a novel that annoyed me this much in a very long time. Turns out that Tricks can fetch a ball, but she can’t fetch a better rating. ⅕ stars.