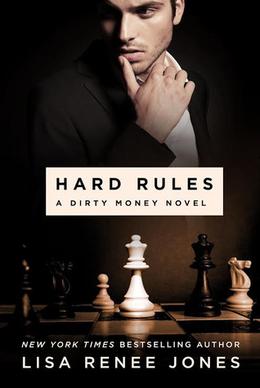 Hard rules is a kick-off to a new series by Leslie Renee Jones. I had never read any of her books before, but knew that she was a one-click author for a lot of romance readers. The tagline of “Wall Street meets Sons of Anarchy” was a intriguing, but also slightly off putting for me, as I’m not someone who ever enjoyed that show. (After watching the pilot and not being too sure, I found out about their ill advised storyline in Belfast and had to nope right out of there.)

Sponsored links
The story opens with a vignette set in the past, about a woman named Theresa, whose father and brother are heavily involved in the local drug cartel. She’s clearly afraid for her life and not wanting to be involved in their world, plotting to leave it, and willing herself to be brave enough to do so. Then the story shifts to the main body of the book, and we never meet her again.

Hard Rules is primarily about Shane and Emily. Shane is a billionaire businessman who is trying everything within him to make his family business a clean one. After decades of money laundering and less than upstanding practices, he’s determined to be right in the eyes of the law. He’s the only one in his family with an innate moral compass, so dragging the rest of Brandon Enterprises into the light proves... challenging.

When he encounters Emily, he feels a strong and clear sense to claim her and protect her. She’s running from something, clearly, but he has no idea what and she’s not quick to share. Their sexual chemistry is immediate and fierce, and he soons trusts her to be his anchor to goodness as he traverses his family.

If you’re someone who loves mysteries and alpha males who use language like “claiming”; if you were someone super into Sons of Anarchy and wondered what would happen if Jax parked his motorcycle and got a law degree; if you’re into slow burn romances, then I’d give this book a go.

If you’re someone who wants things neatly wrapped up within the pages of a book, then you need to walk away from this, or adjust your expectations.

I can imagine Jones seeing this series as an elaborate chess match and this is only the first few moves. While the vibe of their couple-hood is one of assurance, the mystery of who Emily is, what she’s running from, and if she is the Theresa mentioned in that opening bit or not. If the chess game theory is accurate, then I can see how this book is integral to setting up the whole thing. There are definitely some readers who are going to be hooked by this intro, who are going to fall for Emily’s mystery and Shane’s obsession and want to see how everything sorts itself out.

I will probably not be one of those readers. While I enjoy a good dose of mystery, this took it a bit too far for me. Emily’s lack of disclosure, even to readers, and the oblique references about her past, made it very difficult for me to connect with her. I couldn’t tell if she was a victim or perpetrator, a reliable narrator or unreliable one. I never knew if she was someone who justified Shane’s obsession. Additionally, the fact that he knows nothing about her, really, made the “claiming” bit, the “mine” bit of his relationship with her based entirely on physical attraction, which tells me their happily ever after is temporary. I just wasn’t here for it, y’all.

Once the series is over, if someone tells me the resolution is worth it all, I may dip back in. But otherwise, I’ll have to let Emily be angsty and mysterious without me.