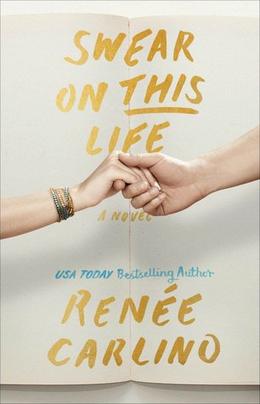 I don’t remember the last time I openly sobbed reading a book. After I finished, I crawled into my roommate’s bed while she worked on her laptop and took a moment to breathe. This was P.S. I Love You (the movie) levels of emotions.

Sponsored links
And you wouldn’t expect that from the cover. Oh, happy gold and blue colours. People holding hands. Fun! The description didn’t really prepare me either, but that’s not the fault of the author as much as it is the fault of every other author who promises a heartfelt ride through a dark childhood and doesn’t fully deliver. And maybe it’s not that they don’t fully deliver, but that Renee Carlino delivered to a degree that most people just can’t.

I don’t know what to think anymore because I’m just a big mess of feelings. So. Many. Feels.

I feel like I’ve just lived a whole other life. I feel like I was at the end of that long, dusty road, wishing for something better and playing games of make believe with the childhood best friend that I was always destined to love. I just feel. Full stop.

To sum it up plainly, because I don’t think I could do so properly without spending eight years at my laptop, Swear on This Life is the story of Emiline, who discovers that her childhood sweetheart has written a book about their childhood from her perspective, give or take a little fictional flair. It’s been twelve years since they last saw each other, but Emiline’s emotions still run deep.

I’m having a hard time putting this review into proper words, because I’m not sure how to describe what I just experienced. And I did experience it. I didn’t read about it. I didn’t watch it. I was there, right alongside Emi as she struggled in both the past and the present, and with Jase, much as I hated him for most of the book.

I think that’s where the real skill of the author comes in. I was just as hurt as Emi was at first, but I didn’t struggle with the same complicated feelings as her because I wasn’t her. There were swathes of her life that I hadn’t lived through. But because of the bits I did, I understood in the end. Does that make sense?

The plot was not action packed. The conflicts were primarily internal. And it was perfect. I’ve always been more of a fan of conflict driven plot, mostly because It’s hard for me (for whatever reason) to empathize with characters. Characters are important, don’t get me wrong, but they’ve never been my priority. I guess it’s more that if I go in with the expectation that I need to feel the characters are real, I will—more often than not—be disappointed. And that’s not fair, so plots are where it’s at. Except this book may have ruined me for all other characters. So many facets! So many degrees! So many emotions!

Jase, you little shit. You made me so mad for so long, even when you were trying to make things right you made me mad. And then you made me not mad. Oh god I’m tearing up again just writing this. This didn’t happen! Why am I so upset?! And poor Emi, who has been through so much and is so shitty at dealing with it. Both of them were so beautifully flawed, and they worked so goddamn well together.

I wish I could comment more on the writing but I feel like I was too wrapped up in the story to notice. That’s not something that’s ever really happened to me before. I assume it must have been good, then, if there was nothing jarring that pulled me out of it. But, frankly, this novel could have been put through a shitty word spinner and it still would have cut a hole in my chest.

My only real complaint was that every loose end in the story was cleaned up a little too tidily. It began to feel overtly saccharine. Then again, I’m gonna be honest here—I needed it. I’m not sure I could have survived being left with any more ache in my heart from the primary story, even if it was a tiny bit of hurt feelings from one of the side characters. I’m for real about the crying. I cried no less than five times over the course of the story, almost from beginning to end, not including the wee sniffles I had in between.

So if you’re ready to feel some things—and please be ready—then pick this book up. 5/5 teary stars!