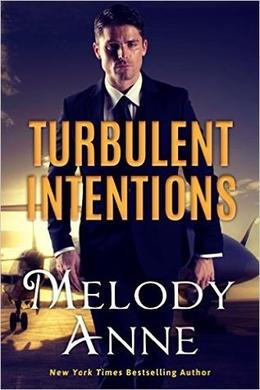 Melody Anne’s Turbulent Intentions is the first in a new series about the four Armstrong brothers; Cooper, Nick, Maverick, and Ace. They’re all the sons of an insanely wealthy man and lived lives of excess privilege. When their father dies, the sons learn there is a clause in his will; in order for them to receive their inheritances, they must live good lives and marry good partners. All the brothers balk at this request, incensed that their father would do such a thing.

Sponsored links
The brothers each react differently, and I’m assuming we’ll spend a book with each one of them. This initial story focuses on Cooper, a pilot and owner of a major airline, and a woman he meets at a wedding named Stormy.

About six months after his father’s death, Cooper finds himself at a wedding, drawn to a mysterious blonde in a stunning dress. They end up having a Cinderella-Prince Charming connection and escape the wedding to have the best sex of their lives on Cooper’s yacht. They do not exchange names, but the woman leaves behind a necklace that Cooper uses to try to track her down, but to no avail.

In the meantime, we know that woman has crashed the wedding and feels completely out of place in Cooper’s yacht. She leaves without saying goodbye not because she’s playing games, but because she doesn’t want to tarnish a wonderful memory with the harsh reality of class differences.

Fast forward six years and we meet Stormy and Cooper again. Stormy is working at a coffee shop in the Seattle airport and Cooper is one of their frequent customers. They don’t exactly hit it off immediately, as Stormy is mortified that Cooper doesn’t recognize her and Cooper can’t figure out why the brunette coffee lady is so hostile to him.

Through some machinations of Cooper’s uncle, who happens to be Stormy’s neighbor, the two reconnect and fall madly in love and live happily ever after. Stormy fulfills the Cinderella plot point that Anne introduced in the prologue and Cooper answers his father’s posthumous request for a stable and good life.

This is fundamentally a sweet story with charming moments. If you’re a fan of gentle romances, this may be up your alley. Most of the dramatic tension comes from misunderstandings, and the sex scenes are easily skipped over if that is your choice. The secondary characters, with the exception of the aforementioned uncle, intrude very little on the story, serving almost entirely supporting roles. Upon reading the prologue and how these two met, plus the combination of the cover, I was gearing myself up for a steamy story, but honestly, Anne emphasizes the emotional connection between the two over the physical.

For me, the dialogue fell a bit flat and the characters a touch two-dimensional for me. I wish we would have seen more of Cooper’s transition between the angry young man and the self-assured mature one; we’re told it happens, but I didn’t get the sense of a character arc. Instead of a developed sense of fulfilling his father’s wishes or even seeking to understand the purpose behind them, it seems like Stormy magically became the center of his world and I was never really sure why.

Stormy is a sweet character, one of those you can tell would summon woodland creatures in Disney movies, and only has a few moments that reflect any sort of personality flaws. Thus, she also read a little too good to be true. I believe people can be and are fundamentally good people, but she just read as too perfect for me and I had trouble rooting for her.

There’s also a catalytic event at the end which read as too saccharine for my personal tastes, but I know other readers will have limited issue with it.

Overall, this is a solid and enjoyable read, perfect for these dog days of summer spent by the pool.