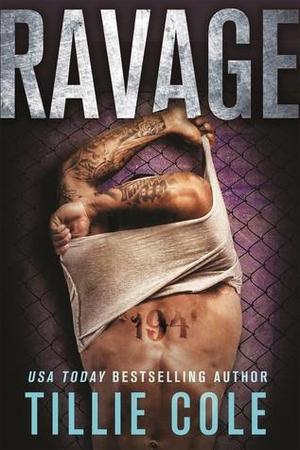 Ravage is no easy, fun read. I always find it interesting how many different directions romance novels can go in. I think that many people assume that romance readers are simply in it for the fluffy plots and the sexy heroes, but this is a prime example of the gritty and dark underbelly of the romance genre. Tillie Cole has created a world of true pain and human suffering in which she bases her Scarred series, and I commend her for it.

Sponsored links
Having not read any Tillie Cole before, I was pleasantly surprised to find I had a new author’s works to comb through. I found her style both gripping and engaging, and the plot made it hard for me to put the book down. It’s the story of 194 (a.k.a. Valentin), a Russian who has been forced into a sort of slavery by a Georgian crime syndicate operating out of Brooklyn. He kills and bleeds for his horrible, evil mistress, all in the hope that he can save his sister one day. When he comes in contact with Zoya, a Georgian with a sibling of her own to save, things get serious. Though he takes her captive and is initially hostile, 194’s tortured soul finds kinship with hers. And that complicates things.

One thing I really liked was the acknowledgement of hostility between the Russians and the Georgians. Too often the two nations are lumped into the same category, or people simply don’t know that Georgia exists, so it was interesting to see that dynamic at play. It was only one of many facets of emotional and psychological packages influencing the characters and shaping their motivations, all of which were poignant and well-described. I’ve never been tortured or felt the kind of angst that either of the main characters experienced, but I got a glimpse—however small—of what that kind of experience could do.

That’s one important point to remember going into this series: it’s dark. Sometimes it’s downright disturbing. I don’t know about the other books, but it certainly met my threshold of darkness. And exceeded it, perhaps. I enjoyed this book immensely, but always with a side of apprehension about diving back into it once I’d stopped. I didn’t want to stop reading because I was invested in the characters and their struggle, and needed to see things go well for them. Conversely, I didn’t want to continue reading once I’d transitioned back into the real world because I knew it would take me into a frame of mind that was littered with uncertainty and anxiety.

That’s brilliant storytelling, if you ask me. Maybe I generally don’t like dark books, and maybe this wouldn’t have been something I’d have picked up on my own, but it captured me nonetheless. I’d be doing the author a great disservice if I didn’t rate this book highly based purely on my preference for lighter novels. She’s an excellent writer, and a skilled weaver of plot. Based on my experience with Ravage, at least.

As for the finer details, all the elements of a good novel were present and accounted for. As I’ve mentioned, the plot was engaging. The writing was fluid and clear. The characters were well developed and I connected with them deeply. Zoya was tough and strong, though had the right amount of tenderness to see through 194’s scars and actions to get to the man inside. And when she did? Oh lordy. There was some sweet, sweet lovin’. The steamy scenes were electric!

The connection was quite quick, which was my only complaint. I like a good slow burn, though there was a lot that had to be accomplished in terms of plot, so it made sense that the romance part was set up right away. It didn’t leave me scratching my head, but it did leave me thirsting for just a few more build up scenes. But hey, it didn’t seem unnatural or forced, so what more can you really ask for?

I’ll be keeping an eye on this series, and I recommend that anyone else who likes love stories along a darker vein to do the same. Though not necessarily the kind of light and fun read you’d take to the beach, Ravage will keep you company in the dark hours of the night when the storms come in this fall. 5/5 stars!