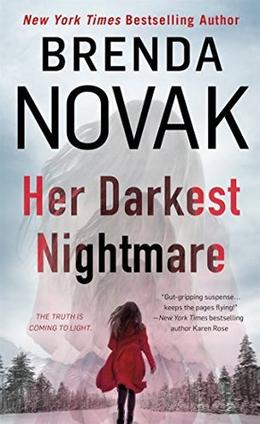 Her Darkest Nightmare is, as the title would suggest, not a puppies-and-sunshine kind of story. In this kick-off to a new series, Brenda Novak introduces us to Evelyn Talbot, a trauma survivor and foremost expert on serial killers and psychopaths. This is a dark and fraught book, going far beyond the normal romantic suspense tropes and falling into full-on suspense.

Sponsored links
We open the book in Evelyn’s adolescence, where she’s bound and capture by her boyfriend, Jasper. He has already killed her best friends, posing them in grotesque and inappropriate positions. The book does not go into detail on how she goes free, but instead jumps to Evelyn’s adulthood. She has recently opened a small institutional home/maximum security prison to study diagnosed sociopaths and psychopaths. Since her trauma, she has become a foremost expert in the subject, and has fought hard to get this center open.

Hanover House is located in the middle-of-nowhere Alaska, with harsh conditions both inside and outside the facility. The local law enforcement, Sergeant Amarok, doesn’t love having the facility on his doorstep. He does, however, love having Evelyn close. Prior to the start of the book, they had a bit of a fling that ended badly, but his torch for her still burns brightly.

The narrative kicks off when two women who work at the facility are found murdered. Or, should I say, parts of their bodies are discovered, greatly implying that they have been murdered. Immediately, the inmates are suspect, but the case gets more complicated and more terrifying as they discover exactly who is involved and how they accomplished the crimes.

Romance wise, this book is a slow burn. Evelyn, due to her past, has serious trouble with both physical and emotional intimacy. While she and Amarok do eventually get together and do eventually have sex, I can see some readers getting frustrated with how long it took them to get there. The stops and starts, the frequent discussions regarding the same topics, these are typical necessities of someone with Evelyn’s past trying to navigate a relationship. However, that reality isn’t the most fun to read. It added to the feeling of everything about Evelyn’s life being unsettled, and thus leaving me as a reader feeling unsettled.

However, if Novak had spent all this time telling me that Evelyn was still running from her captor, both physically (he’s never been captured) and emotionally, and then had her jump into bed with a dude, I would have been pissed. So bravo to her for taking Evelyn’s journey seriously and I will completely admit that when they finally slept together, it brought slight tears to my eyes that Evelyn had finally found safety.

The mystery and the process of solving it was compelling to me and I didn’t see the conclusion coming, so that was definitely satisfying. This book is definitely setting up future books; we have both a cliffhanger epilogue and the feeling that Amarok and Evelyn are just getting started. I think Novak is going to invite us back to both Alaska and Hanover House several more times, and I also think I’ll be along for the ride. While I didn’t love the pacing of this book, and some of it was more frustrating than fascinating, I liked the book overall. I’m not a frequent reader of suspense, only dipping in and out, so I may be missing some of the nuances of the genre. However, if you’re looking to get in on the ground floor of a new series, full of twists and mysteries, this one is a good book to pick up.