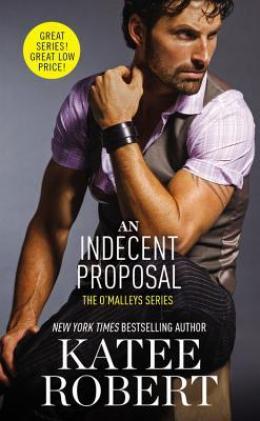 I’m always excited to pick up a book about the mafia, especially when it involves either the Irish or Russians. As someone who adores villains, the mob seems like the perfect mix of refinement, violence, and badassery. That being said, I was a bit put off by the cover. That guy doesn’t seem much how Cillian (the hero) is described. I know that’s not hugely important but that guy’s like for real forty and I think Cillian is twenty-seven. Also I hate his shirt. So not a great start, but I was confident that with accolades like the ones the author had received, I would be in for a good time.

Sponsored links
Katee Robert is a New York Times and USA Today bestselling author with apparently quite a large fan following, but I found this book to be just very meh. It’s the story of Olivia Rashidi, the bastard daughter of a Russian crime boss who tapped out of mafia life after having her daughter. That’s why she’s so on edge around Cillian O’Malley, a patron in the bar she works at. The O’Malley’s are the Irish big bads, and Cillian is the reformed hot mess of the family. No longer getting shittered and making bad decisions, Cillian winds down his days with an ice cold apple juice and hopes to catch the bartender’s eye.

Obviously there’s a good deal of conflict that comes from the almost-but-not-quite Romeo and Juliet pairing going on here. And there’s conflict in the fact that Olivia fights against her desire for Cillian. But it just wasn’t any conflict that I bought into. I think it was trying to do too many things, you know? Like both of them were so tortured and broken, and that’s made clear to the reader every six seconds. The whole reason Cillian drinks apple juice is to remind us that his drunkness was essentially the cause of his brother’s death, so now he’s got to keep under control. But like, there are better ways to do that than apple juice. It looks like pee, my friend. Get a freaking coke or something. I don’t know why it bothers me so much but it does.

And Olivia. Oh god, Olivia. She was all over the place, fighting against her desires like they were demons inside of her. I’d like to see her on a diet. “I can’t have that pizza. But I must! When was the last time I had good pizza? Oh god, but it will ruin my whole world if I eat even a nibble. How destructive am I feeling today? I am death. I am doom. I will eat.” At first I thought I would like her, because the novel opens with Cillian’s POV and she seems kind of tough and interesting. Then we get in her head and I just wanted to nope out. It hurt my brain to read.

This was also one of those books where you get other people’s POV who are going to have their own story soon, and I’m just not about that. It really pulls me out of the narrative to have to start thinking about how things are going to go for this character in the next book in the series, especially since I’m not going to be reading the rest of the series. I would prefer if we just get a bit of a window into their story through the eyes of the current protagonists. But hey, that’s a-me. Others surely love when that happens.

There are parts of this book that I enjoyed, hence the three star rating. I thought it was written well enough, and I liked the setting. I really want to travel to Boston now. The romance aspects of the story were quite good once they got going and I did end up being quite engaged. I was kind of rooting for the sexy Russian baby-daddy though, tbh. He was a complete dick, of course, but I would choose Russian over Irish any day of the week. And Cillian was too nice. He had his dickish moments, but he spent too much time being cut up inside about everything. I recognize that I’m not the most emotional person that’s ever lived, so maybe I just had no idea what Cillian and Olivia were going through. Maybe they weren’t over the top about it. Maybe other people will really enjoy that. And, of course, the steamy scenes were top notch. The tension from the ones at the beginning carried through, and I think that was some solid work on the author’s part.

So some parts were quite good, most parts were a bit blah. There wasn’t anything that I would consider bad, though, so that’s a plus. Three middle ground stars!