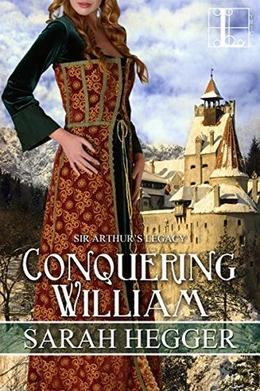 Conquering William is the story of William of Angelsea and his new bride, Lady Alice of Tarnwych. We open on their wedding day, a scant few moments after meeting each other, and the story takes us through their first few months together. With rich detail, vibrant characters, and an evil nun thrown in for good measure, Conquering William is recommended for any historical romance fans.

Sponsored links
Alice is on her fourth husband, and hopes this one sticks around long enough to give her a child before dying tragically like the others. Her father made a good match, financially, but who knows what he’ll actually be like. Alice’s only companion is Sister Julianna, a severe and pious nun who has been with Alice since her mother’s death when Alice was a child. Sister Julianna is truly the only constant in Alice’s life; but she is also constant, whispering in Alice’s ear, passing judgement on every decision, muttering under her breath as the soundtrack to Alice’s life.

William’s family has a bit of a… reputation, shall we say. We’ve been told these stories in previous books, but it’s not necessary to read them to understand what’s happening here. Since Alice doesn’t know either, she provides a fabulous audience surrogate to the events of the past. Well, so does Sister Julianna, as she has some opinions about the family and they aren’t kind ones. “Abomination” and “whore” are two of her favorite words, to paint you a picture about what a gem of a human she is.

Due to Sister’s influence, Alice is loathe to trust this handsome and charming man who is now her husband. She is anxious to have a family, however, so she begrudgingly interacts with this William from Southern England, sure that he won’t be any more pleasant than the previous.

How wrong she is.

William finds his new wife fascinating. Dressed in clothes befitting a pauper and not the heiress of a keep, she is quiet and meek. When they’re alone, however, he detects a spark of personality which he suspects has been snuffed out by the Sister. Determined and intrigued, William sets about to uncover the true Alice and introduce her to herself.

In that way, the book title really should be “Conquering Juliana”, as it is her influence which keeps Alice from living her best life. There are a lot of unfolding facets to that statement; but I want each reader to experience it for themselves and thus am hesitant to unpack any further.

As an aside, what I know about Medieval England largely comes from Disney’s Robin Hood cartoon, so I have no idea if anything is accurate. I had to Google some of the words for clothing items, and definitely fell down a few nerdy rabbit holes in doing so. I find the book to be compelling and the narrative to be sparkling, but for anyone who is an expert in this time period, I cannot swear to authenticity. Felt it to me; none of the dialogue or idioms felt jarring and instead served to create a sense of time and place.

I really did love this book; inhaling it in nearly one sitting. I was completely taken with both William and his family, the love between them all so tangible I felt I could see it. I loved how flawed both Alice and William were and how they communicated through their conflicts. I loved reading about how people were portrayed as complicated but mostly redeemable, with the exception of two key characters who were demonstrated as toxic evil. The ideas of justice and mercy, played with throughout the plot, ran alongside hope, community, and joy.

This was my first novel by this author but it will not be my last. Thanks for this story and I look forward to more.