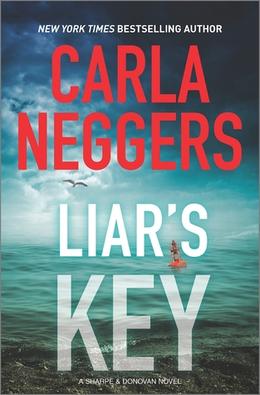 Liar’s Key is the 6th book in Carla Neggers’ Sharpe and Donovan series, about Emma Sharpe and Colin Donovan, two top FBI agents who have found love in hopeless places. This is my first exposure to the series, and I found it a little overwhelming at first, and would not really recommend this as a jumping in place for new readers, but the mystery and resolution was definitely satisfying.

Sponsored links
Split between the Republic of Ireland and the United States (specifically Boston and Maine), the action in this installment centers around the world of high class art heists and thievery. From what I can tell, these are themes explored before and Neggers makes it clear to readers that these characters know each other outside the bounds of these stories.There are family members and old enemies who pop up in this book, adversaries that both Emma and Colin thought in their past that worm their way into the present. All against the backdrop of Emma and Colin trying to plan their wedding and honeymoon.

I always struggle to review suspense novels, never wanting to give anything away. The back copy of the book tells readers that Emma is suspicious when a retired FBI agent drops by her office for a “chat”, just as she is on her way out of town for a family function. He’s not someone Emma ever truly trusted, and his vague hints at rumors of upcoming crimes makes Emma suspicious both of the agent himself and the names his attaches to his rumors.

However, he’s attached to her family, as he worked with Emma’s grandfather for years. Emma’s family is high profile in the art world, and her grandfather worked as a private investigator regarding stolen goods for years. This connection is too significant to fully dismiss, so she puts some feelers out amongst her contacts and quickly discovers the rumors come with truth. Colin is sucked into the case from another angle, but sucked in all the same. I hesitate to offer more specifics.

As a complete newcomer to this world, I was overwhelmed with the sheer amount of people I had to keep track of. It appears we’ve met a lot of these folks before, and so Neggers spends little time unpacking character traits or connections for us. If I was a reader of the series, I would have greatly appreciated the time spent with old friends, savoring connections made in installments past. Like a good procedural crime television show, this series clearly builds upon relationships revealed and built before the action starts.

The action in this one starts slow, however, so I had a lot of time to be confused. I got the impression of a John LeCarre novel, where the spycraft is high and so subtle conversations and clandestine meetups are the key. Because so many people were involved that I was supposed to know, I got lost and frustrated a few times. Once I found my footing and the action of the plot got going, I did enjoy myself. The whodunit is well crafted and has a satisfying ending.

I’ve added the rest of this series to my TBR, looking forward to starting from the beginning with Emma, Colin, and their exploits. As far as romance goes, it does take a backseat for most of the book. There’s several lovely moments, and the conclusion is great, but this is a couple whose story is getting told over a long period of time. The commitment and trust is clear, but the traditional romance fan may find not enough bang for their buck here.