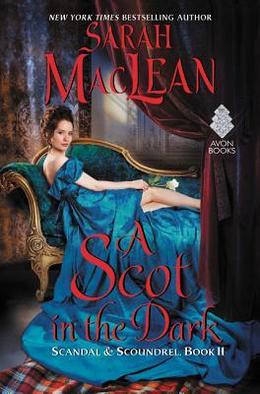 Sarah MacLean is one of my auto-buy authors. She’s a trustworthy source and I know that even if I don’t absolutely love one of her books, I’m still going to really like it. It’s got something to do with the book magic she weaves that completely works on me, but also to do with her focus on writing unconventional heroines.

Sponsored links
“But she writes Regency books,” you say to me. “The whole sub-genre is full of convention and that’s kind of the point.” And to you I would say that’s completely fair. I have several esteemed reviewing colleagues for whom MacLean’s books (and this one in particular) do not work. The historical details aren’t accurate, the particularities don’t line up, etc. I see their very valid criticisms and am thankful they took the time to point them out.

For me, however, what I’m looking for in a Sarah MacLean book means that most of the inaccuracies don’t really bother me. There were other things I didn’t love, but most of it worked for me. I wanted a character-driven story that I could lose myself in over a long plane ride, and that’s exactly what this is. I adored so many pieces of this book that it outweighed the things I didn’t love pretty hard.

This is part of MacLean’s “Scandals and Scoundrels” series, so the basis of the story is like if E! Network was a thing in that era and was covering the lives of the ton. In this one, Miss Lillian Hargrove has grown up sheltered and lonely. The ward of a dukedom which frequently see tragic demises of their dukes, she’s been essentially holed away in a cupboard under the stairs for years. She’s never really received proper schooling or socialization, and while she wanted for nothing, she still kind of wanted for everything.

She falls in love with a silver-tongued artist, who promises her the world if she will just pose for him. She falls for all of his lines and all of his promises, and believes they’ll live happily ever after. As she has no one in her life to tell her differently - no friends, no family - she has no one to poke holes in his crazy and douchebaggery. So when one of the paintings of her - the nude one! - is the one he announces as a display to the public, her world crumbles. She simply didn’t see it coming and it activates the backbone she’s always had, but never had the opportunity to use.
The only solution she has is the Duke of Warnick, as he controls her access to cash. The current dude is a Scotsman named Alec who loathes England and English ways. He comes to London at the bequest of a trusted friend, who informs him of Lillian’s plight. He’s a grumpy one, a hulking mass of a man who doesn’t have any idea how to function in this world, but is pretty comfortable in his. He has a plan to fix Lillian's situation and then get the hell back to Scotland as soon as possible.

Of course, mayhem ensues, nothing is straightforward, and the two stumble their way to a happily ever after, growing and changing in the process.

As I said above, I didn’t love a few things. I didn’t love how quickly this all happens - whole plot is less than a month and that’s a tad quick for my personal happily ever after timelines. I didn’t love that the artist keeps showing up in other parts of their world, as it all felt a little too contrived. I didn’t love the final moments to do with the painting. I’m also getting weary of “brutish” and “Scotsman” being interchangeable in Regency romances. I get it, Highlanders are a great contrast to Regency ballrooms and that contrast serves as a fabulous plot device, but that correlation is just starting to feel a little… done.

What I did really like, even love, about this book is Lillian’s journey from isolation to community. Part of bringing Alec into her world means that she left that proverbial cupboard and was introduced to friends. The women in Lillian's’ life were even more important to me than Alec, because if she had just gone from man to man, with no additional external support, I would have noped right out of this book. I wanted a less hurried journey, but I appreciate the built-in panic that MacLean based the story on.

The dialogue, as always, is sparkling and the banter witty. Alec’s a broody one, so if you’re averse to broody heroes, he’s probably going to do your head in. Lillian’s a great heroine, and I think I’ll like her even more as she shows up as a supporting character in the rest of the series. Overall, with the caveats and warnings above, this one delighted me.