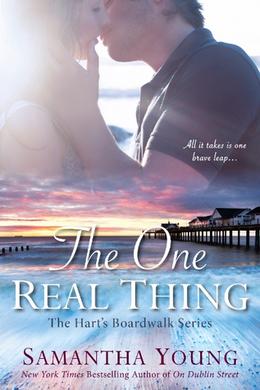 This book took me much longer to finish than I would have liked. It felt like every time I picked it up, something more interesting would distract me—such as a weird itch in my leg or a passing dust mote. It’s so strange how books can affect you so differently. I read a book recently that inhibited my ability to feel pain and hunger. I’ve read books that have made me ache. This book just made me really bored.

Sponsored links
The One Real Thing is the beginning of a new series set on and around “Hart’s Boardwalk”, a boardwalk in a little town with a curse on it that makes people fall in love if they hang out there together. Okay, maybe in the book it isn’t called a curse, but it felt a bit like one because it constantly followed me around as I read. I wasn’t sure whether the boardwalk was actually meant to be a little bit magic or not. It would have been way more interesting if it was, in some like really weird and crazy way. And with a price. All good magic comes with a price.

The premise of the tale was that Jessica Huntington, a doctor, finds some really sad love letters in a women’s prison she works in that never made it to the man they were written for because the writer died tragically before they could. So Jessica, being the bleeding heart she is, goes to Hartwell to do what she can to deliver these letters and bring closure to a decades long love story.

If you’ve seen Letters to Juliet, it’s a very similar kind of idea. Except Letters to Juliet is a romp through the dusty, warm streets of Italy. It takes the viewer through vineyards and sun-baked dirt roads. The One Real Thing is set in Delaware, for crying out loud. I had to look up Delawarian scenery because it’s not someplace I think I’ve ever even seen before. Or thought to check out. Or really knew existed.

Okay, I knew it existed. But you get my point.

The romance felt heavy handed and not terribly convincing. I felt no real chemistry between Jessica and Cooper, the hunky bar owner that she runs into and of course gets paired up with. Especially since one second Coop is all, “I don’t date. I am caveman with deep issues,” and the next he’s all, “Who’s that funky chicken wing walking into my bar and how can I put a ring on it?” And even though Jessica is right back at him with the wanting to smush vibes, she’s got a dark secret that forces her to keep people at arm’s length.

Of course! Because who doesn’t have a dark secret these days? You know, I’ve only ever met one person with a dark secret in my life, and they were basically a sociopath. And even that was a surreal experience. Do people actually walk around in real life with big dark secrets chasing them around that they’re so afraid to tell people it turns out to be a novel-climax worthy moment when they finally reveal it? I get that there’s a degree of fantasy to fiction; that’s the whole point. What I don’t get is why the reason behind concealing “secrets” like Jessica’s. When everything came to light I was kind of just like, “Wow, those were hours of my life I’m never getting back.”

Getting past the plot and cardboard characterization, the writing was fine. That’s why I’m giving this two stars instead of one. From what I understand this author has done much better, but this was fine enough. Not particularly clumsy, not particularly eloquent, it hung out in this middle area where I could have read it happily if the plot had been a little better. But, being honest, I’m still not sure what the plot was. In my mind, everything could have been wrapped up in the first couple of chapters. Letters delivered, secret revealed, sexy times had. Done.

All in all, if this is your kind of thing then maybe hang out and wait for the rest of the series to see how it plays out. If not, give it a hard pass. ⅖ stars.