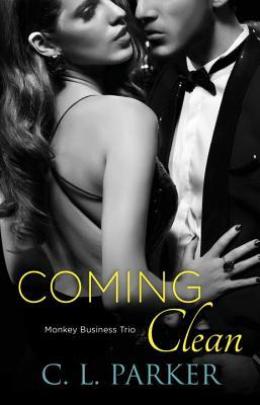 Alright, so I’m here a little late in the game. This is the third and final book in the Monkey Business Trio, which other than its horrible series title seems to be quite interesting. I probably would have been more interested in the first book in the series (not just because it’s the start of the story, but also because it just seems to have more tension) but I haven’t put that on my to-read either because I just don’t think this series is for me. But don’t leave! This was a really good book for someone, and I’m about to tell you why.

Coming Clean is set (more or less) three years after they have their precious baby boy. It’s the story of Cassidy and Shaw rekindling the spark in their now kind-of-dull relationship. Cassidy’s having body image issues since having the baby and, though she loves being home all day with their son, is struggling with feelings of insecurity about being absent from the corporate world. Shaw is fighting within that world to secure their future. The result is less than sexy. Until, of course, Cassidy decides it’s time to make a change.

I didn’t not like this book, but I found it kind of boring and depressing. It wasn’t just that I hadn’t read the other books, either. I think I just discovered the stage of the relationship I’m not interested in reading about, both because it lacks the buildup of sexual tension that a new couple does, and because I like to think that once these couples are together, shit is awesome forever. That is incredibly short-sighted, I know. But it’s fantasy! I don’t want to think that my favorite couples are going to be good for a few years after their books end, but after that they’re just as susceptible to mid-life ennui as the rest of us. I don’t even want to think about reaching that stage myself yet!

Whine, whine, whine—I know. I shouldn’t dislike a book just because it makes me think about real life, but I more or less read to escape real life. Leaning heavily on the more there. And this book did help me do that to a point. It wasn’t a failure of a book. It was quite a good book in what I’m sure is quite a good series. The characters were extremely well written, there was a solid helping of humor, and I enjoyed the world the hero and heroine existed in. I enjoyed them as people, but also as a couple.

There was genuine chemistry here, the kind of chemistry that comes from having three books and a kid together. And there was emotion, too. It just fell flat with me because I was coming in too late. I felt a bit voyeuristic about the whole thing, to be honest. I didn’t know these people, and yet I was watching them have steamy relations and work through their relationship.

Speaking of steamy relations—that’s clearly something this book has going for it. Like the rest of the novel, the intimate scenes were creative and well-written. While I found the rest of the plot to be a little bland, the sex was exciting and interesting.

And that’s why I’m a bit stuck with this novel. I want to give it a higher rating based on the fact that it’s a good book that I just didn’t enjoy for my own reasons, but I also don’t think I would have liked the series very much. Something about it, besides the complex characters and chemistry between the hero and heroine, just didn’t stick.

I’m going to go with a solid 3.5/5 stars for Coming Clean. I wouldn’t recommend reading it without reading the two before it, but if you want to try a new series then get on the Monkey Business train, headed straight for marriage and babies land. And yes, that sounds every bit as weird in my head as it does in yours. Roll with it.