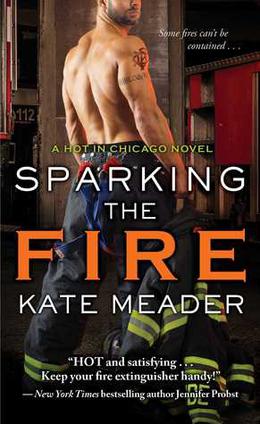 Man. What is it about firefighters? This book gives us not only that, but a double dose of panty-melting goodness: a firefighter who used to be a marine. Break out the paper fans and the sweet tea, ladies. It’s getting hot in here.

Sponsored links
This book hooked me right out the gate. And then, if it wasn’t enough that I was already into it, there was a little twist that had me saying “Hot damn” within the first few pages. It was one of those books that starts good and just keeps getting better. I have just discovered a new author to stalk on the internet. Thank you, reading gods.

So this is the third book in the Hot in Chicago series, which follows the Dempsey foster siblings. They’re all firefighters, they’re all hot, and they all share a bond that is so strong and so sweet it’ll have you wishing you had cool firefighter siblings too. Unless you have cool firefighter siblings already. In which case, I’m jealous. Wyatt Fox, our hero, is the oldest of these siblings. Not only the oldest, Wyatt is also the broodiest, and—I may be biased here since I haven’t read the others—the hottest. He’s like one of the only romance heroes I’ve read who has a beard. And I love me a good beard.

Molly Cade is the heroine of this story, an actress studying for a role as a female firefighter. She doesn’t realize that the firefighter she’ll be consulting with is none other than the sexy former Marine she had a week long fling with years ago. And neither of them realize that the passion they shared would be so quick to rocket back to the surface. Well, maybe Wyatt has a clue since he basically agrees to do the job because he knows it’ll put him in contact with Molly. But he has no idea how fierce this passion is going to be.

It could have just been that and I would have been happy. If they’d met again and just started back into the lovin’, I would have still read along with a smile on their face. And normally all I want in life is sexual tension! That’s how compelling this story was. But it wasn’t that simple. It probably would have been a pretty boring novel, to most people, if it was that simple. Both Wyatt and Molly try to keep their feelings in check, even though it’s as obvious as a Belieber at a Slipknot concert that they’re at risk of setting the fire hall on...well...fire.

I think I found the chemistry to be so sizzling in this novel because the hero and heroine truly challenge each other. Wyatt is quiet and reserved, and Molly helps bring him out of his shell. Molly is still recovering from a scandal and a super stressful divorce with her giant asshat of an ex-husband. Wyatt offers her protection and support in the sexiest and sweetest of ways. And while they’re growing to love each other, they keep up an entertaining and witty dialogue that never failed to keep me engaged.

Molly wasn’t my favourite heroine ever, but she was sassy enough that I grew fond of her over the course of the book. Though she made frustrating decisions at times, the way she spoke and the way her POV was written tickled me.

And let’s take a second to talk about the writing. Kate Meader—how have I not discovered you before? The prose was concise but elegant, descriptive but not flowery. I didn’t once feel like I was slogging through the writing for the sake of the plot. It was truly a pleasure to read, and I sure as hell will be picking up the previous novels in the series. This is actually the last book, sadly, so the previous novels are all I’ve got to work with now that I’m done this.

Was the steam steamy? Yes. It was the steamiest of steams. You will not be disappointed. For me, this book was Lauren Layne levels of hotness. I’m not sure I can describe it better than that without getting weird.

This review can be summed up by me saying that reading this book made me want to set my apartment on fire in the hopes that a Dempsey-esque dreamboat would come fireman-carry me out of the building. I have a feeling my landlord and my roommate might take issue with that, however. Perhaps I could start a small fire. If you never read reviews from me again, it’s because I’m in jail for arson because of how much I loved this book.