The Life She Wants by Robyn Carr 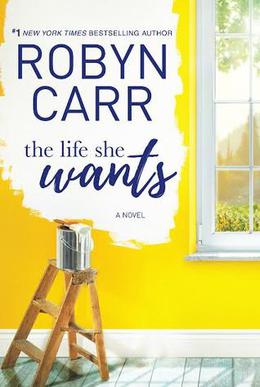 I know there is an audience for this book, I’m simply not it. The characters felt flat, the plot seemed unlikely, and the happily-ever-after I was waiting for was not earned. If you’re looking for a romance, know that this book is far more plotted as a friendship story than a romance. Each woman does end up with a fella, but they are absolutely treated as afterthoughts.

Sponsored links
Emma Shay Compton lost everything when her husband was caught perpetrating a Ponzi scheme which defrauded hundreds of folks of their life savings. There was a lengthy investigation and very public trial, after which her husband committed suicide so that he would not have to go to jail. Thus, when we meet Emma, she is taking the $9,000 she has left to her name and road tripping from coast to coast.

Even though she left her small California town years ago, she has nowhere else to go once she flees New York. Her father is deceased and her stepmother is of the Cinderella variety, so no love lost there. Additionally, she had a massive falling-out with her childhood best friend over a boy fifteen years previous and they have not spoken since.

Lest you believe this feud is one of teenage angst and not relevant to our story, let me dissuade you. It, in fact, drives our story. This argument is festering.

The childhood best friend, named Riley, stayed at home. After Emma went off to college, she and Emma’s boyfriend, Jock, were both feeling abandoned and started to cling to each other. Clinging led to other activities which led to a baby, who at the time of our story is fifteen. Thus, all these folks are in their early-30s. Riley and Jock never fully committed and it sounds like Jock was a pretty crap dad for a while, so when we meet Riley, she’s a pretty closed-off and bitter person who appears to believe she needs no one.

Riley runs a very successful house cleaning business and has made quite a name for herself in the town. Also involved in her life still are her mother, June, and her brother, Adam. Adam and June are quite enthusiastic about seeing Emma again; Riley, not so much.

Emma arrives home and falls on the mercy of her one remaining friend, who finds her a place to live while she job hunts. After a few failed attempts at employment, which include a burger joint which has no name, but is named in increasingly snide puns in Emma’s POV, and a hospital, Emma is forced to ask Riley for a job. Riley agrees to hire her, only on the condition that Emma not date Adam.

So as Adam and Emma chug along, dating behind his family’s back, Emma goes through a minor journey of self-discovery. While she honestly had nothing to do with her husband’s dealings, no one believes her. She vows to become more observant to the world around her to be able to stave off any other crises in the future.

Eventually, Riley finds out about the dating and it’s a THING. There’s some further drama with a sketchy boyfriend, and a few paragraphs of Riley reflecting on the grudge she’s holding and then it’s just kind of … gone. A death-defying event is thrown in for good measure as a motivator of reconciliation, but by the end of the book where Riley and Emma are both their respective men and best friends with each other? I’m not quite sure how we got there.

If these women were “bygones be bygones” kind of gals, why would they feed on their mutual resentment for fifeteen years? How is it possible they’ve never Facebook-stalked each other? I just don’t get them.

If you find the falling-out compelling, which I, personally, struggled with, then perhaps you’ll take a more empathetic view towards our protagonists. As I said at the top, I know there’s an audience for this book, people who will either not see or not be bothered by my quibbles and enjoy the warmth with which Carr writes. I’ve read so much of her other stuff that this isn’t my break-up call with her or anything. This book is simply not for me.