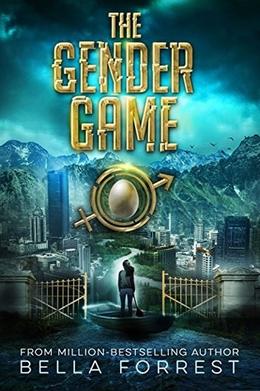 Y’all, can we just be honest for half a minute? I am so tired of dystopian YAs. Especially with plucky female protagonists who are praised for being emotionally detached and physically brilliant/magical. The Gender Game is firmly in this wheelhouse, so if you’re itching for more, then pick up this first-in-a-trilogy-because-that’s-the-YA-law. This book should absolutely not be judged by my fatigue of the tropes and should be weighed as a book in its own right. That’s exactly what I have attempted to do, even though I feel the title is more of a marketing nod to the girl on fire than an accurate depiction of this book, but that’s neither here nor there.

Sponsored links
A toxic river divides the world that Violet Bates lives in. In the east is Matrus, the land ruled by women and in the west is Patrus, ruled by men. She’s a bit of a bitter one, especially since the disappearance of her younger brother several years previous. She’s constantly breaking various laws and getting into scrapes with authorities, she’s in prison in Matrus but in order to possibly find/save her brother, she has to go to Patrus, where breaking even one rule could result in her death.

I’m actually hesitant to say anything more than that. If you’re in on that description, then give the book a try and I think you’ll find a lot to love. If you’re eye-rolling already, this one is not for you.

As this is a trilogy, you can expect a cliffhanger. Know that the romance that’s teased in all of the promotional material isn’t really in this installment, and I didn’t really even get a maybe-later vibe, personally, but who knows.

I also had some quibbles with the world as presented. Are there no transgender folks in this world? Also, Matrus is known for being peaceful and other stereotypically female traits, but they keep compliant young boys as slaves? That didn’t quite jive for me.

Violet, as a protagonist, was also a touch hard to empathize with. She kept repeating errors which got her in trouble, instead of growing from them. It was almost as though she was inviting trouble, and in a world where the stakes are literally life and death, I wasn’t exactly on board with her pride dictating more than her wisdom. I can imagine many readers sticking up for her, as her life has been hard and many of her emotional reactions are justifiable. They are, believe me, but 640 pages of them gets a little wearying.

And to be quite frank, the whole thing is a little wearying. The plot drags and meanders, with too many complications and too few action events. This is not a world I’ll be returning to, personally, but if YA is your favorite and you’re looking to read some female-centric dystopian adventures, then give The Gender Game a whirl.