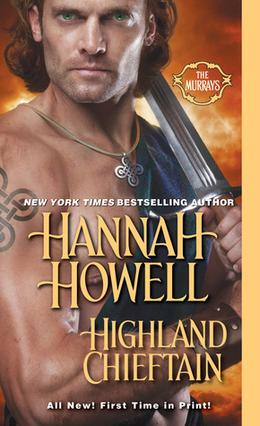 I have a thing against typing out dialects in fiction. I’d much rather have someone say “he spoke with a thick brogue” than have it all typed out phonetically. To my eye/ear, it comes out as slightly patronizing, as though someone’s unique voice could be translated to that direct pronunciation and it removes me from the story. So, for me, Highland Chieftain was gonna fight an uphill battle from the beginning, as the dialect is peppered throughout each page.

Sponsored links
Hannah Howell is a prolific author and has spent much time writing about the Scottish Highlands. This is her 21st book the Murray Family series alone. They’re all standalones, so anyone concerned about jumping in at any point shouldn’t be. I’ve read a few other of Howell’s works, always forgetting she’s one of the ones who types the dialect, and usually end up ploughing through, charmed by the characters and the setting.

I’m sad to say that this book was more of a slog than normal. Bethoc, our heroine, and Callum, our hero, had limited chemistry and I never really believed in them. There were a few too many side plots for me to keep track of and I just never really connected with anything. Howell is a gifted storyteller, but I think this one was a swing and a miss.

Bethoc is a fiercely independent woman, living in her father’s house in medieval Scotland. Her father is an abusive ass, but his abuse is more directed to the group of young boys who live in the keep. Bethoc refers to them as her ‘brothers’, but those boys were trafficked from other families or keeps. Clearly, he’s a gem of a human. Bethoc has a bent towards taking care of others. She’s out wandering one day when she happens upon an unconscious man in the woods, and she gets him to a cave where she can set his broken leg and help him heal.

Callum is in the highlands looking for a lost relative when he’s accosted and left for dead. Thankfully, Bethoc finds him. As Callum slowly recovers, he gets to know Bethoc and they, of course, fall in love. It just so happens that the lad Callum is looking for is one of the lads Bethoc’s dad has taken possession of. Thus, when Callum is healed, the bond is strong enough for them to leave the cave together.

The first time they’re together, Bethoc is so inexperienced that I felt uncomfortable saying that she gave consent. I’m aware the treatment of this scene is probably 150% historically accurate, but it still didn’t make for pleasant reading for me. I felt squidgy that she knew what she was doing, was getting into, was participating in. Plus, in his inner monologue, Callum isn’t super into how virginal she is and appears quite callous to her emotional self. It wasn’t offensive necessarily, it just wasn’t what I look for in a romance hero.

There’s a whole thing with Bethoc’s father’s murder, and some other side plots that take over a lot of literary real estate that I just couldn’t make myself care about. I think fans of highland romance, of which I am only nominally one, will enjoy this, but if you’re looking for an entry point into the subgenre, I wouldn’t hold this up as a shining example.