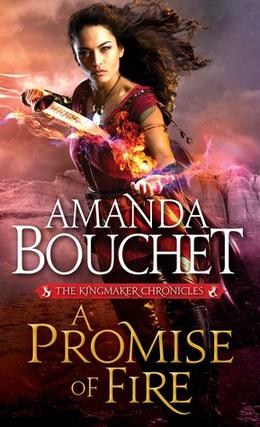 I’ve never gone back and forth so much on a novel. There are so many good elements to A Promise of Fire, but also so many that made me sit back and say, “Hmm”—and not in a good way. I think this is a case where a good vision got lost somewhere along the way. Like Brush-Ups. Do you remember those? They were little disposable finger toothbrushes in the early 2000s. At the time, I thought they were the dumbest shit I’d ever seen in my life. Now I see that they were a good idea that was really just the victim of poor execution. This book is a little like that. I can see why some people would love it and I can see why some people would hate it. I sit somewhere in the middle.

Sponsored links
I thought I was going to get a heroine I really loved here. We open to Cat Fisa, a young woman working as a clairvoyant in a traveling circus who’s on the run from something. We don’t know what that is yet, but there’s enough teasing to make us want to know. She’s got interesting powers—like the ability to detect lies—that make her powerful as an asset, but not always powerful as a person. She’s snappy, snarky, and easily holds her own against any threat that comes her way.

Until Griffin. Or, as he’s referred to for much of the book (and I hate this name but I understand why the royals are referred to like this), Beta Sinta. What that means is he’s the second in command of the recently conquered kingdom of Sinta. From the get go, he’s described as being huge, muscular, and having a hawk-ish nose. These descriptions are repeated over and over again throughout the book, which was problematic for me. Why? Because I kept accidentally picturing Shan Yu from Mulan.

Let me tell you, he is not the guy you want in your head in a romance novel. Unless you’re into it. In which case, have at ‘er. Not the case for me, unfortunately. I had to stop and try to think of someone else to take his place. Normally I don’t put a real face to a fictional one when I read, but in this case there was no avoiding it. Picturing Richard Armitage helped, but I still couldn’t quite get into him as a hero.

All description aside, he and his crew were kind of jerks anyway. They kidnap Cat because she’s a powerful asset to their kingdom, but then don’t understand why she spends so much time griping. I don’t mind the kidnapping trope if it’s done well, but in this case it wasn’t. Nobody from Beta Team was even slightly repentant. Instead of working through the problem together, at some point Cat just basically got over it. No me gusta.

Like I said, Cat started out strong for me. There were lots of times during the novel that I considered her to be clever, levelheaded, and wise beyond her years. The times when she was hotheaded fit in with her character well and rounded her out. But then there were so many times over the course of the narrative that she acted like an absolute child. She was so back and forth with her feelings about Griffin and the others that a vein nearly began visibly pulsing in my temple. I feel like you can’t constantly complain about being a captive and then also be cool with it. You’ve got to make up your mind.

I did, however, really enjoy the fantasy elements in this book. I liked the idea of the magic and the way magic was dispersed through the kingdoms. And I loved—loved!—the use of Greek mythology. Since I’m not naturally a fantasy reader, having a world that was new but I could at least partially identify with was a huge help.

Writing wise, I didn’t have many complaints. For the most part, the prose was enjoyable. I got a bit annoyed with how much the author built up the tension between Cat and Griffin, though. They couldn’t look at each other without Cat nearly exploding. It was too much after awhile. While I wasn’t totally on board with the romance, the romance scenes weren’t bad. I’ve read better, but I’ve also read worse. Any enjoyment I had was ruined anytime my carefully placed mental image of Richard Armitage slipped in favour of Shan Yu, which happened quite often since there was near constant references to his hulking frame and muscles.

All that aside, this was a debut novel. And, for a debut novel, it was quite enjoyable. There was enough mystery and suspense to keep me interested in the plot, even if the romance was a bit lost on me. And for that, I’ll give it 3.5/5 stars.