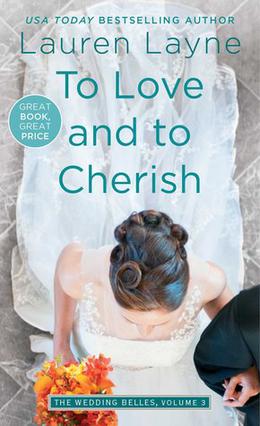 I have been waiting for this book for nearly a year, so you can imagine my delight when it was finally loaded onto my Kindle and I could settle into it. I blocked out a few hours, shut off my phone, and lost myself in the full story of Alexis and Logan. The final installment of Lauren Layne’s Wedding Belles series about a high-end, boutique wedding planning business in Manhattan, To Love and To Cherish is both a stand-alone story and the perfect culmination a wonderfully constructed series.

Sponsored links
We’ve known Logan and Alexis for the whole series. Alexis owns Wedding Belles, is poised and professional, and has no idea that Logan is in love with her. He’s the Belles’ accountant, but no one really understands why he’s not Alexis’ boyfriend as well. Their chemistry has been apparent, but mysterious, and I was curious how Layne was going to resolve it all.

The book opens in a prologue, set eight years in the past. Alexis is new to New York, armed with spreadsheets and visions of grandeur but almost no capital. She meets a charming, British stranger at a bar and they hit it off immediately. After talking to Logan for a few hours, they enter into a partnership, with Logan as silent investor to the Belles. She queries why he would make such an offer to a perfect stranger and he says that if she’s lucky, one day he’ll tell her.

The rest of the book is spent in the present. The previous two books in the series have been spent on the love stories of the other Belles, and it was lovely to still spend some time with them in this book as well. I don’t believe that anyone new to the series would be lost, as Layne carefully and deftly explains who they are and doesn’t focus on callbacks to previous novels. As Logan and Alexis were both significant but perifory characters in the other books, I was glad to focus on them this time.

In some ways, their lives are exactly what has been presented. They’re essentially a non-sexual couple. Alexis relies on Logan more than she relies on anyone, and Logan has organized his entire life around Alexis. We’re told of their routines, their emotional posturing, and how each of them holds themselves back from the other. They’re soulmates without ever bearing their souls.

Something happens to each of them in this book that causes a seismic shift in their lives. Two phone calls, each from parents, which change everything. They both have to, in their own ways, decide if who they’ve been is who they still want to be, and how long is too long to wait for someone to realize your worth, even if it’s yourself.

I’m usually a habitual note-taker as a reviewer. I take the job seriously and so I want to ensure I capture things correctly. Y’all, I stopped taking notes in this one about 10 pages in. I was simply too caught up in the story. There’s nothing really dramatic here, except in the way that all our lives are quietly dramatic.

I believe these are real people because they really could be. They feel tangible, fresh, and familiar; I’ve had these conversations with friends, I’ve been part of circles that become family, I’ve known what it’s like to answer the phone call that shifts reality, both calmly and catastrophically. I’ve known the feeling of realizing your happily-ever-after is both scary and empowering, and my friends are also all scarily good at their jobs. I’m surrounded in my personal life by powerful professional women, who are also warm, caring, and sassy, so the Belles feel immediately like beloveds.

I know the wedding planner trope is over for some folks, and I respect that. It’s not for me, I still love it, but I know that the premise of these books is going to cause some folks to give it a pass. However, if you are even remotely open to reading about a wedding planning business, I cannot encourage you loud enough to pick this up. I found them all wonderful and know I will be returning to them again.