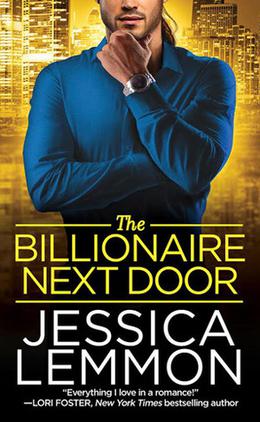 I’ve seen Jessica Lemmon’s name around Romancelandia for a while, but I’ve never picked up one of her books before. It could be that I’m generally weary of billionaires (I’m in much more of a working-class hero place at the moment), or simply that I’ve never been super grabbed by the back copy of a paperback, but nonetheless, The Billionaire Next Door is my first foray.

It will absolutely not be the last.

I ate this thing up with a big fancy spoon and think that many other readers will do the same.

Rachel Foster is tending bar in Chicago after quitting her last job, and her last boyfriend. Said boyfriend, who is a rat of the highest order, took her promotion out from underneath her, after taking credit for her work. She left the marketing firm and the relationship and is ready to move on to bigger and better things. She hasn’t told her parents yet, but that’s a problem for another day.

She befriends one of her regular customers and our story is set in motion when she agrees to dog sit for him while he’s off on business to Japan. The friend lives in the famously swanky Crane Tower, so Rachel’s pretty excited to live in the lap of luxury for a bit, but determined to treat it as a vacation and not an aspirational journey.

Turns out the dog has a bit of an attachment disorder and yelps all throughout the night while Rachel is on shift. Her upstairs neighbor, Tag, is having none of it, so he storms down to confront her, but calms down upon seeing her. Immediate chemistry crackles between the two and Tag is determined to find out who this woman is. Insert some hijinks regarding knee-high boots and a Great Dane and pretty soon Tag and Rachel are a thing.

The thing is, Tag’s last name is Crane, as in Crane Tower, as in Crane Hotels, as in the Cranes of Chicago, and Rachel quickly finds herself in a world completely foreign to her. She’s wary at first, especially since he seems like a dream come true, but eventually falls hard. Tag falls for her quickly as well, but when it comes to the point where it’s time for a permanent commitment, he flees. They both have a lot to learn about vulnerability, trust, and hope throughout this novel and I’m pleased to say it ends emphatically happy.

The banter between the two was sparkling, the sexual chemistry fantastic, the actual sex very steamy, and the secondary characters rounded out a delightful world. Tag’s a billionaire who, get this y’all, actually works. Plus, there’s a bit of process nerd joy in here as Rachel helps Tag plan bars at some of his new hotels. I learned more about the trade in this book than I have before and it’s already made my trips to my local more enlightening.

Overall, this book is wholeheartedly recommended for fans of sassy and sexy contemporary romances. I plan on scooping up Lemmon’s back catalogue as soon as possible and I deeply hope they’re all as fun as this one.