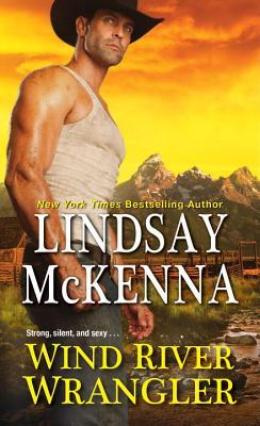 Shiloh is at Wind River Ranch for a visit, but also hoping the change of scenery will lift the writer’s block she’s currently suffering through. That writer’s block is connected to a life she’s fleeing from, however, and the long-term effects of trauma follow her to Wyoming. So, before we go any further, trigger warnings for stalking, especially stalking by a sexual predator.

When Roan collects her at the airport, his horse wrangler senses can pick up on her terror immediately. This triggers his protective instincts and he’s immediately drawn to Shiloh. What follows for the next several hundred pages is them both thinking about having sex with each other and thinking a lot about each other bodies without actually doing anything about it.  Eventually, they do act on their impulses, but that wait is long, dear reader.

I’ve started writing this review about four times and then stopping, because it’s a hard one to review. In so many ways, this book is fine. Shiloh and Roan are likable, the plot plods but does move, the setting is richly detailed. I’m averse to Westerns as a genre, so I tried to keep an open mind, and was hopeful when I realized this was a suspense as well. But page after page of detailed descriptions instead of dialogue, internal monologues instead of conversations, and a build up of nearly 75% of the book before they had sex… Guys, I gotta tap out on this one. I was, admittedly, bored for most of the book and only finished as I was reviewing it.

Additionally, I get squidgy about some of the ways Shiloh is portrayed. She’s clearly vulnerable; being the target of a predatory stalker will do that to a woman, and we’re told that one of the things that attracts Roan to her is her “child-like” ways. When I combine that the child-like ways may have also attracted the stalker, or may be a consequence of the stalker, I’m not sure how I’m to believe that she’s a fully formed adult woman, capable of making sound sexual decisions, and it all starts to feel a little… squidgy.

I’m aware that other readers feel no such squidgyness and for some readers, this book is right up their alley! If you choose this book, I hope you enjoy it! I hope it’s escapist and draws you into its rhythms. This one didn’t work for me, nor will I be trying again with further books in the series.