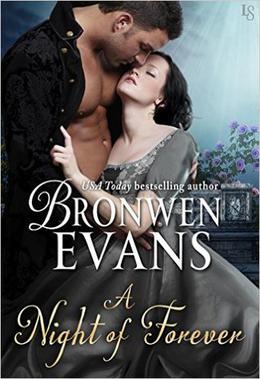 This book didn’t work for me on a few different levels, but before I dive into that, I want to pause to give author Bronwen Evans credit for something. I am usually banging on about authors who treat their series books as standalones when they’re not. If I’m going to be confused, I say, take three pages to set the scene for me! It cannot be that hard. And dear readers, Evans proved just that. In three pages of an intro to the entire series and the placement of this story in it, Evans centered me. I learned that this is the sixth book in a series about a group of men called “The Libertine Scholars” who have known each other for yonks and are currently being hunted by an evil murderer. I learned that this story connects to the previous five, but I do wish I could have gotten a touch more detail about the connections between those books and this one.

So, credit where credit is due, thanks to Evans for giving me a fighting chance at understanding this world and the fact that this book is the climax of five previous.

However, even with that gratefully received introduction, I was frequently lost. Because most of the plot elements had been building for hundreds of previous pages, I was not nearly as invested in the meta-narrative as I should have been. I wasn’t particularly affected by the reveal of the villain, largely because I didn’t connect with any particular character in the story.

I hesitate to describe the plot in any more detail than you’ll find below. Arend is one of the Libertine Scholars and trusts absolutely no one. When faced with the possibility of befriending the stepdaughter of the person he believes is out to destroy he and his friends, he jumps at the chance. Isobel is in need of a husband, and while Arend isn’t really perfect, he’ll do.

So essentially, it’s a mutual using society, with layers upon layers of intrigue that I just… couldn’t care about. Arend read to me as cold and calculating, Isobel infuriating at worst and just simply there at best. But, in recognition that I am a latecomer to this world, I cast about the interwebs for thoughts from other readers. It seems the boat is mixed on this one. Some folks are thrilled with the conclusion to the story and others rate the book low and feel the series rapidly declined throughout its tenure. If you’re a rabid fan of these Libertine Scholars, I’d imagine you’re going to read this book no matter what. Please come back and tell me how it worked for you!

From all my research, it seems this series is a rare crossover between the Regency subgenres and the suspense ones. If that sounds like it would be right up your alley, I’d encourage you to find the first book, A Kiss of Lies, and dive on in.