Another Chance: An Austin Heroes Novel by Kathy Clark 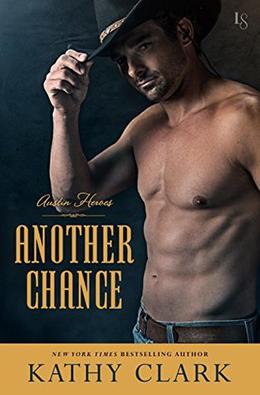 How fitting that I should be writing a review of the most political romance book I’ve ever read on one of the most momentous days in political history. Well, momentous in American history anyway. And since I’m Canadian, my stakes in the US election are not huge. That being said, I still care. They’re our biggest neighbour. It would be foolish not to.

But I absolutely do not want American political discourse entering into my sexy reading material! Especially since this book wasn’t even all that sexy. (More on that later.)

This book deals with more than I feel a romance novel should about two topics that one of today’s political candidates (and perhaps America’s new president by the time you read this review) seems to feel pretty strongly about: illegal immigrants and terrorism. Ah yes, two light topics for us to frame our story with. Not!

Before I even get into that, I’d like to mention that the description says this book is sure to please readers of Nora Roberts and Karen Robards. I don’t know why authors do this. I feel like it just sets the reader up for disappointment. Also, don’t tell me what I’m going to like. Just because I like Nora Roberts does not mean there is anything sure about me liking your book.

That rant over, let’s have another rant!

Okay, so the heroine in this novel is Bella Shaw. She’s an attorney who works on immigration issues trying to help the little guy. Obviously a problem occurs when her high school sweetheart Luke Archer returns home. Not just because he broke her heart after high school, but also because he’s down there as part of Homeland Security’s effort to stop some terrorists who are planning to infiltrate the USA via Mexico. Don’t worry though, people, the author isn’t suggesting Mexicans are terrorists. Far from it. It’s the Syrians and Afghans who are terrorists and they’re just hiding amongst the hispanics via their physical similarities. Which yes, is something we’re told. And yes, our hero can spot the difference with a 95% rate of accuracy.

This premise in itself isn’t a huge problem for me. Terrorism happens. Illegal immigration happens. But the two main characters are both on such opposite ends of the spectrum that it leads to debates between them about immigration that made it difficult for me to connect to the romance. That’s a problem when romance is meant to be the main thing going on here. There’s a shirtless cowboy on the cover, for crying out loud. What did the author think I was coming here for?

And here’s another thing: Not all the readers are going to be American. Getting down to the nitty-gritty of American political discourse when a big chunk of your readership probably doesn’t even care that much about their own country’s politics is straight up annoying. If I wrote a romance novel that featured the love interests debating Quebec sovereignty, you bet non-Canadians would get bored.

But enough about that. Don’t you want to know if the rest of the book was good enough to put up with this small portion? It wasn’t. Not really. There will definitely be readers who found everything they were looking for, but I did not.

The only thing I really enjoyed was the setting. I enjoyed reading about the critters and the scenery and all that fun Texas stuff. But the rest of the book was a bit bland. The romance wasn’t terribly exciting. The sex scenes definitely didn’t “burn up the pages” as the description promised. In fact, I hardly noticed they were there. Except from one point when they were getting it on in the pool and the salt on them afterward made them more buoyant? What even does that mean? Was the jizz helping them float? You know what, I don’t wanna know.

The writing was fine and the dialogue was also fine. I might have given the book two stars if there wasn’t also a little side subplot that ended up with some old people knockin’ booties. Luke’s Grammy was a really cute character until she started getting it on with Bella’s dad. Then I found myself losing interest.

Also, the reason the couple broke up in the first place was weak. Did you think we wouldn’t notice the obvious rip-off of The Notebook? We did notice, and we were not impressed. ⅕ stars.