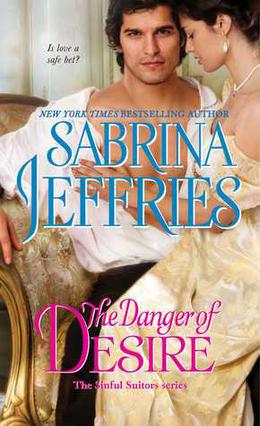 I normally love Jeffries’ writing. I’m captured by her characters and enthralled with the plots. This one was overall less successful for me, but a testament to her incredible talent that I was still compelled to finish it. I found it plodding in places and never truly connected with the hero or heroine. Fans of regency romance will find nothing exciting here, but certainly a nice, solid book written by one of the genre’s best.

Miss Delia Trevor is a most unusual lady. In order to root out the card shark who cheated her brother, she spends her early evenings making the rounds at gala balls and her late evenings at the dodgiest of gaming halls. She’s trying to discover a lord with a sun tattoo on his wrist and the lad is proving quite elusive.

Warren Cory, the Marquess of Knightford, has been asked to keep an eye on Delia by his cousin Clarissa (who readers may remember as the heroine in The Study of Seduction. Clarissa had a pretty poor debut season, what with being stalked and assaulted, and so she’s determined to do better by her husband’s charge, Delia. Warren’s dubious at first, not particularly into the idea of babysitting, but his first encounter with her changes his mind. She’s a: clearly hiding something and b: clearly not a simpering debutante like he feared. This favor to Clarissa will involve babysitting, for sure, but the location of gaming hell versus ballroom has Warren intrigued.

He discovers her dressed as a boy and is immediately annoyed. However, he also realizes that his promise to Clarissa means he has to help Delia in this insane quest, whatever it is, and make sure she doesn’t get herself killed. As bound and determined as he is to discover her secrets, he is equally so to hide his. All the subterfuge, however, leads to chemistry and they are eventually caught in a compromising position and forced to marry. Then the join forces to uncover the tattooed lord, as well as learn to trust each other with those burdensome secrets.

I won’t spoil anything, because I was honestly surprised at the identity of the culprit, but suffice it to say that it’s a more complicated story than Delia assumes. I believe, in fact, that the lord with the sun tattoo may just be the hero in this next installment in the series, which is fine, but it means the last ¼ of this book was spent more setting up the next book than finishing this one.

I think this particular novel would have been a bit better as a novella, as there wasn’t really that much there there for me. I didn’t buy the reparate between the two nearly as much as some of my fellow reviewers on the internet, but nor was I put off by them. It’s as much of a case as “good for her, not for me” as anything else, as this hero and this heroine just didn’t tick any of my boxes. I’ll be reading the final book in the series, most definitely, as I enjoyed the first two more than this one.

As I said in the preview, if you’re a regency fan, this one is a straight-down-the-middle pitch to your tastes. Anyone looking for a reinvention of the wheel should look elsewhere, but that doesn’t mean that Jeffries isn’t a master of her craft.