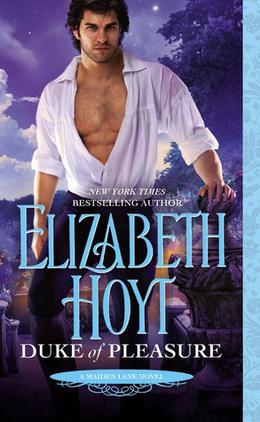 Elizabeth Hoyt is one of those authors where you can pick up one of her books and just know you're about to have a good time. Having loved another book in her Maiden Lane series, Duke of Sin, I was super excited to read this book.

Duke of Pleasure centers around the Duke of Kyle, Hugh Fitzroy. He's dangerous, he's dark, and he's a total DILF. Seriously. Look at the cover of the book. Wouldn't you die if you saw a guy like that strolling toward you? Anyway, he's back in London after spending a bunch of time on the continent - and he's ready to eff up some nasty dudes named the Lords of Chaos. These guys were the baddies in Duke of Sin, so it was definitely nice to see someone take up the sword against them. They're also hella creepy, so I'm all about the struggle to take them down.

Hugh's got a little help in his endeavour. First from the mysterious Ghost of St Giles, a masked vigilante who he quickly learns is actually a woman. Then from Alf, a skinny street urchin of a boy who does not give a flying foxtrot about anybody's authority other than his own. Except Hugh soon learns that Alf and the Ghost of St. Giles are one and the same. And that's when things get interesting.

Unfortunately, this revelation doesn't come until like halfway through the book. So if you're looking for a romance that takes off quickly, you will not find it here. It's not even really a slow burn, as 99% of the interactions pre-reveal don't involve any sort of sexual tension. It's just kind of...a book. Now, that's not a bad thing. Hoyt is an excellent writer, and the plot is complex and interesting. I just felt a bit bored during the first half. I kept waiting for them to start doing the do, and when they did not do the do, I did get frustrated.

I think this fact is mostly made up for by the fact that once the reveal is made, things are turned up to eleven. And this is why I love Elizabeth Hoyt. Smoldering looks, sexual thoughts, and situational chemistry that will make your toes curl are all up for grabs in this book. If there's one thing I love to go along with my romance, it's a mystery. And in this novel there's mystery, action, adventure, and...a ball!

We're not just talking a little Pride and Prejudice dancing while having witty conversation at the ball action. Alf has to dress as a woman and go sneaking around. Danger lurks around every corner. And holy hell, how is she lookin' so fine in that dress? This is also the start of Alf starting to talk in a way that didn't make my head hurt.

I understand, she's a street urchin. She's not supposed to sound upper crust-y. But god, did I get tired of reading "Oo?" and "Guv’na". Also, I hated the name Alf. It just made me think of either the cat eating alien Alf, or elves. Neither are fun things to have on your mind when you're trying to get into a sex scene. Neither.

But with those minor points aside, I really enjoyed this novel. After the initial slowness, Hoyt ramped up the intensity and kept me flipping through the pages like a maniac. Everything that you can expect from one of her novels was present. I'm talking hella sexual tension, amazing description, intricate plot, distinct characterization, and the hottest sex you can read without spontaneously combusting. I would have preferred not to read the word "cunny", but there are worse things in the world.

I loved this love story. I was rooting for both the hero and the heroine, and especially for the two of them together. Neither of them were broken characters, but they were both flawed and had enough emotional issues to make them interesting. And all of those flaws and issues knitted them together as a couple perfectly. In fact, I haven't read a more suited couple in a very long time.

This is a book I would recommend for everyone, not just people who enjoy historical romance. Generally I'm not a big historical romance fan myself, but Hoyt's writing would be a shame for anyone to pass up. All the parts of romance that romance readers love, she has in spades. And she somehow is able to tell a story within the confines of era-appropriate language and customs without making it dry. So get out there and read it!