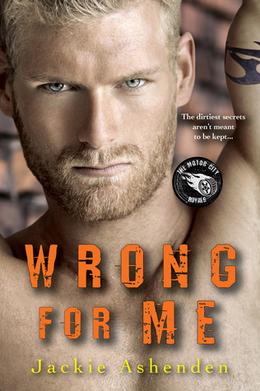 Okay, so Levi Rush has spent the past eight years in prison for manslaughter. The dude he killed was trying to hurt his once-upon-a-time best friend, Rachel Hamilton, so apparently it’s fine that he feels no guilt whatsoever. Anyone hurting anyone is deplorable, but does that mean it’s okay to end a life? The worst part is, that’s the least problematic part of this book. The. Least.

Wanna start at the most problematic? Rachel didn’t testify on Levi’s behalf, nor did she visit him in prison, so now he’s out for revenge. Since he came into some money in prison and apparently was good at managing it, Levi managed to buy the property that Rachel’s tattooing business is squatting in. You know how they say with great power comes great responsibility? That, much like guilt and other human emotions, doesn’t apply to Levi. So Levi does what any normal, well-adjusted human being would do.

He blackmails his former best friend into having sex with him. Well, technically it’s extortion, but don’t tell the heroine that.

Now that is something that’s icky all on its own. But when you consider the nature of Rachel’s “crimes” it’s even more deplorable. She was sixteen years old when Levi went to prison. SIX. TEEN. She thought if she told anyone what happened the night Levi killed that guy, they would find out about her sickly gran and separate them. In a perfect world, Rachel would have testified. But even in the world on the page, Levi—who was eighteen—should have spent his eight years in prison doing something other than plotting sexual revenge against a woman for her actions when she was a child. (And as a fun side note, she wouldn’t have been able to visit him in prison at sixteen anyway without permission from a guardian, if at all. They don’t just let kids walk in to see convicts…)

If you think that’s not bad enough, the ickiness grows. Rachel feels sick about this whole situation because of her limited but horrible sexual past. And if you want to layer it on a lil thicker, Levi makes her move in with him like some sort of super creep.

When did taking away the choices of a strong, independent woman become sexy? I guess some people are into it, but it creeps me out. Maybe it doesn’t seem as bad here because Rachel doesn’t actually act like a strong, independent woman. She acts like a doormat. No amount of guilty conscience should make it okay for some guy you haven’t seen in eight years to coerce you into having sex with him. None. And they were all in the same friends group! It would have been pretty easy for her to get someone else to back her up against Levi.

But I guess since this is some magical place in Detroit where you can set up multiple businesses in abandoned buildings without licensing or health codes and not get super kicked out/arrested/fined, that’s all fine and dandy. Honestly. This one, my friends, was a massive eye-roller.

Now if we take a step back from the horrible, cringe-y plot, perhaps there are redeeming qualities to be found elsewhere in the novel. Or, perhaps not. The writing seemed to be more filler than actual action. It was a lot of Rachel and Levi thinking about their feelings about things, and not a lot of doing things. I hate when conversations are spread out over pages and pages because of all the internal musings between words. Real conversations don’t work like that!

The sex was kind of meh. I know you’re supposed to use all the senses when writing, but I really didn’t want to hear about how she smells down there. More importantly, I would NEVER want a dude I was getting frisky with to comment on that—even as a compliment. Maybe that’s just me, but for whatever reason it smothered any tiny fraction of enjoyment I got out of the sex scenes.

The one and only part of this book I did like was how—eventually—Levi more or less realized how much of an ass he was. But even that was ruined by Rachel essentially giving him a thumbs up and telling him it was all good in the hood. Seriously, Rachel? This is a classic case of a TSTL heroine.