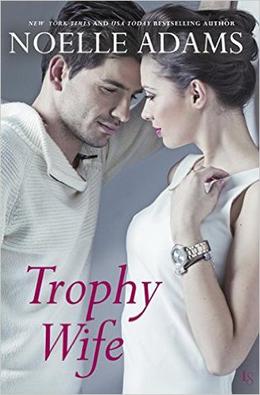 In Noelle Adams’ Trophy Wife, Allison Davies is learning the hard way how to stand on her own two feet. After being a trophy wife for her entire adulthood, she gets the gumption to leave her asshole husband and strike out on her own. Thankfully she has a house to escape to, as she was bequeathed her grandmother’s house out in the North Carolina countryside. Downside is that she got only a little money from the divorce and has the life skills of a particularly sheltered teenager.

Thankfully, her neighbor, Rob West, has lived in the town his whole life and is a genuinely good dude. He offers to help his gorgeous new neighbor and after a few rebuffs (she doesn’t trust men, especially helpful ones) they end up falling into bed together and then falling in love.

I felt confused for most of this book. Not because the plot was complicated, but because I couldn’t quite buy that these two people would work together. I can see how Allison would be that sheltered, but if we’re going to take her to the extreme of not ever working a day in her life, but excelling at charity events, I would have rather had her get a job as a community organizer than a waitress. There was a lot of fish out of water for our heroine in this book, including the guy she was attracted to. I would have liked something to ground her to herself.

As for Rob, he’s got a savior complex a mile wide. Still running around after his ex-wife, cleaning up her messes and saving her from herself, I’m surprised he even has the mental energy to court Allison.

They do the secret romance thing at first, but really it’s secret banging as the romance is limited. Everyone in their lives is convinced SUPER quickly that they’re perfect for each other and I do mean PERFECT. The town is full of characters rather than people and it all just feels a little… off.

This is also a shorter book - not quite a novella, but not quite a novel. Perhaps with more pages, some of the things that made me raise an eyebrow would have been developed a little bit more.

This book, sadly, was a swing and a miss for me. I’ve enjoyed others of Adams’ works so I’m sure I’ll check back in with her next one.