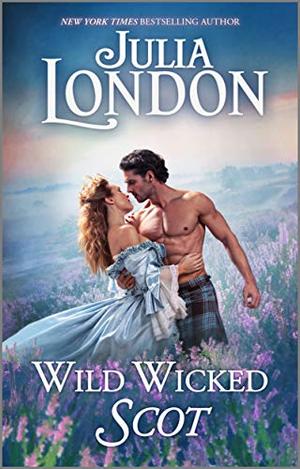 There are a lot of things to love about this book, especially for Scottish historical fans. The book is deeply embedded in the historical setting - during the Jacobite rebellion - in a way that makes it feel live and real. There’s some dialect work done here, but it’s not alienating for those of us who are generally turned off by it. The culture clash between an English lady and a Highlander laird is the core of the story and is explored well. There’s a touch of intrigue and espionage that did keep me turning pages. My issue was personal in that I couldn’t ever really connect with the pair of them.

Margot Armstrong is a flippant and shallow child, a girl in her first season when we meet her. Her shallowness is not her fault, however, as it’s clear that she’s been raised with about twelve silver spoons in her mouth. Her life is consumed by the season and potential suitors and is shocked and grieved when she discovers that her father has married her to a Highlander and she is living England immediately.

Arran McKenzie needs a wife and an alliance with a wealthy English family is a good side benefit. With the Act of Union between England and Scotland pretty fresh, he’s hoping his willingness to have such an alliance will curry favor with his new king. He’s not particularly political, but he is deeply invested in making sure his people are safe and cared for.

Imagine a young London socialite being hauled off to the back of beyond. She’s been trained her whole life to be one kind of wife and shows up to a completely different world. She’s taught to eat a certain way, they eat another. She’s been taught to dance a certain way, they’ve been taught another. Margot has no understanding that different doesn’t mean bad, and neither does Arran. Before long, she runs off back to England, determined to never see her husband again.

Three years pass and Arran has gotten quite used to not having his bride around. Imagine his surprise when she rocks up, ready to assume her rightful place as head of the keep again. You can imagine his skepticism. He’s convinced she’s working for someone, a spy of some sort, as there has been growing trouble in his region with the Jacobites. She repeatedly assures him she’s back because she misses him, but he is dubious.

Of course, she is working for someone - her father. She’s been sent to see if Arran is sympathetic with the Jacobite cause or loyal to the crown. Her blind trust in her father is slightly mystifying as she blames him for sending he to Arran in the first place, but nonetheless, she trots off to Scotland to do his bidding.

What happens from there is a maze of double-talk, secrets, and both Margot and Arran learning what marriage really is. They have to figure out how to communicate across a GIANT cultural divide, and what trust and love mean to them. Their emotional journey is quite tied to the events of the espionage plot, so I don’t want to unravel them here, but there are some lovely moments of discovery for them both.

While the pair never really worked for me and I never connected with them enough to buy their romance, I have a feeling other readers will quite enjoy this story. As I said at the top, if you’re a historical fiction fan, I think this’ll be right up your alley.