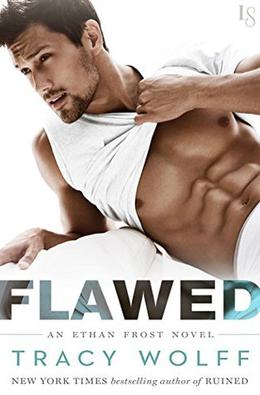 Flawed is Tracy Wolff’s fourth installment of the Ethan Frost series. Be warned, however, that Ethan’s primary appearances in this one are off-page. Instead, this book focuses on his wife’s brother and her best friend.

The activating event happens early; one of Tori’s ex-boyfriends (or just ex-flings, I’m not fully sure) releases a sex tape of them against her will to the wider internet. He is a famous dude and she’s kind of infamous, so the tape spreads quickly. This precipitates her father to disown her and kick her out of her house with absolutely nothing he has paid for (so, clearly, Tori’s interactions with men who treat her like garbage comes from somewhere). She walks barefoot for two miles to get to Chloe’s house. As Chloe and Ethan are in San Francisco and our story is in LA, she assumes the house will be empty and she can lick her wounds and come up with a plan from there.

Problem is that Miles, Chloe’s brother, is living in the house. Additional problem is that he’s also Tori’s sworn enemy. Of course he’s completely into her and she hates him, so he starts taking care of her immediately and she takes it wrong until she takes it well and then they’re sleeping together and her world is changed.

I feel pretty strongly this isn’t a stand-alone book and I’d be shocked if the author intends it to be so. This feels like an extension of an arc she started several books ago, books I didn’t read. The reason Tori hates Miles, for example, is tied to previous books and even though it’s explained in this one, I never connected to it. Instead of feeling sympathetic to her perception of him, because I met them at the same time, I felt she was being unreasonable. This, of course, colored by reaction to them as a couple.

It takes a lot for an angsty romance to work for me, (I think I spent all my lifelong supply of angst-love on Dawson’s Creek and the reserves have never been refilled) so I readily admit I’m not the audience for this. Wolff’s fantastic at crafting sensuality and sexual chemistry and that is no exception here. A steamy read for sure, and one that I think fans of the series will enjoy.

My rating reflects the benefit of the doubt I’m giving the author here. I’m sure she built her world well in the previous books and the chemistry between the two of them in this one kept me turning the pages. However, I would absolutely not recommend it to anyone who hasn’t read the previous books because I just don’t think we’re meant to.