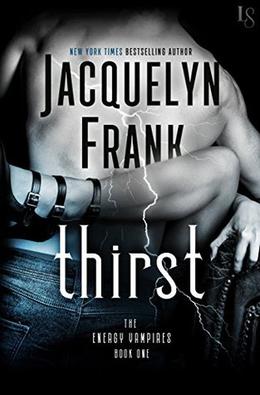 Do you ever just read a romance novel that makes you go “hmm”? Not in a good way. Like in a “why would you choose to do that thing” way. Because that happened to me a lot with this novel. I feel like Jacquelyn Frank took a lot of chances, and I wish I could say it worked out for her. But in my opinion it didn’t.

Let’s start out with the premise. That’s the biggest hmm moment of all. So this novel centers around Renee Holden, a police detective investigating a strange murder, and Rafe DaSilva, an...energy vampire. Oh yeah, you read that right. None of the typical “I will suck your blooood” vampirism here. This dude feasts on energy. And who does he find to be a tasty sip of energy? The police detective investigating the work of a sloppy member of his people who he wants to be put down.

Mmmkay. Even if I could get on board with this energy vampirism thing, the parameters of how this new and interesting concept works are off-putting. More off-putting than the hero’s beard and goatee. (A GOATEE for crying out loud. What is this, the early 2000s??)

First of all, e-vampires is an off-putting name. It reminds me of e-cigarettes, which is perhaps a great comparison. Much like e-cigarettes, it’s a less dangerous version of an old favorite that is being packaged and presented to the consumer as a hip new alternative that’s just as fun. Except it isn’t. Neither version is good for you, but only one has ever been seen as cool.

What makes e-vampirism decidedly off-putting? A lot of things. Primarily, the fact that only drinking the energy of “pure” individuals will keep you young and healthy. If you go into this book with any question of what it means to be pure, they will all be answered. And then some. We’re talking clean, organic, non-smokers, non-drinkers, no drugs. The hero and heroine meet in a supermarket, and spend way more time than anyone has on their hands talking about how much they freaking love organic food. The hero even talks about how much he’s into canning, and how he makes his own applesauce. Seriously? Is that attractive for a vampire? Like how much time must this dude spend doing meal prep every week? What if there’s no time left over for the good stuff—the brooding about his immortality, the reveling in his darkness, the sitting on lonely rooftops and watching the centuries go by? That’s what we’re all here for, in some form or another.

And since when did it become appealing to be young and beautiful forever but ONLY if you eat well? And it’s not like pure people are easy to come by in this day and age. That’s why Rafe is all pleased as punch to find such a tasty treat in the heroine. But his bite is no love nibble. E-vampires bite the back of the neck, with their fangs sinking down to the spine. THE SPINE. That is exactly where I noped out of this concept entirely. Even if the fangs don’t penetrate the actual spine, that still makes my skin crawl.

And after a victim has some of their energy sucked out, they can expect to sleep for up to a few days. That’s another nope for me. Rafe bites Renee against her will the first day he meets her and then wipes the experience from her memory. That’s a HUGE nope for me. Like that’s gonna affect a person’s life. If you’ve got a bite that can put me out for days, you stay the hell away from me. And yet she agrees to let him bite her again once she knows what he’s up to. What?? No thanks.

I wish there were other redeeming qualities to report so that those who aren’t put off by the e-vamp thing might still find some joy. There weren’t. The writing was okay at best, and the dialogue was literally snooze-worthy. I didn’t understand why in the hey the hero and heroine were interested in each other at all, minus their shared love of organic everything. The sex scenes were boring. Legitimately boring.

And the big reveal at the end? I’m going to ruin it because it’s absolutely ridiculous. E-vampires are descended from aliens whose ship was hit by lightning, causing them to need to suck up energy to survive. Excuse me? Picture that crazy guy from the History Channel with the big hair talking about aliens right now. Picture that and tell me how sexy this book sounds. It doesn’t.