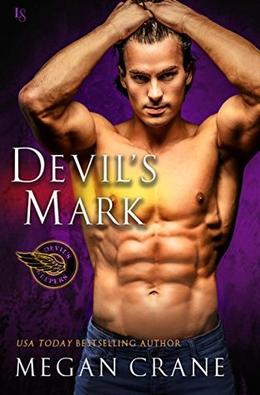 If you like filthy, raunchy, downright dirty books, this may just be for you. Because Megan Crane writes ‘em dirty as hell, and this one is the dirtiest of the dirty so far as I have seen. But there are a couple things that you might want to consider before one-clicking it. And I’m saving them for the end.

Devil’s Mark tells the story of Killian “Uptown” Chenier, a dirty no-good biker, and Holly Chambless, super clean, super queen daughter of their town’s disgraced mayor. They call Killian “Uptown” for most of the book, but I’m gonna go ahead and not do that because I think the whole nickname thing is dumb. Not only that, but Uptown is a horrible nickname. It just sends my mind into a rendition of “Uptown Girl”, which is not what you want playing in the background while you’re reading a raunchy biker book.

Anyway, Killian’s got a chip on his shoulder about Holly’s dad, so when she walks into the gross biker bar he and his clubmates use as their home base, he calls dibs. Holly’s dad was just arrested, so she has apparently decided to take a walk on the wild side and get a job at said gross biker bar. It’s not what I would call a meet-cute.

Here’s the thing: I only have two main complaints about the book. If you were to take out those two things, I think this would be a out of the park hit for Crane. The interaction between the hero and heroine is generally witty and amusing. I didn’t think Holly was TSTL. It wasn’t like she went to get a job at the bar thinking it would be a walk in the park. She expected things to get a bit nasty. She’s no little white lamb—much as everyone apparently thinks she is. Just because she’s lacking in experience, doesn’t mean she’s lacking in heart or cunning. And I found that quite interesting.

Killian’s a decent enough character too. He’s got his head on his shoulders, and definitely gives off an alpha vibe that can’t be ignored. He resists his feelings for Holly just long enough to keep it interesting, but not so long that it’s frustrating.

As for the writing, there are some clever turns of phrase, and I think it’s generally pretty good. Crane’s words are well thought out and well organized. But, leading into my first (and smaller) problem with the book—there were way too many thoughts and not enough action.

People don’t read these books because they want to experience the characters thinking about the story. They want to be inside the story. When there’s several lines of text between each piece of dialogue, it’s hard to pay attention. I ended up skipping huge sections in favor of just reading the dialogue in certain scenes. And, you know what? I don’t feel like I missed anything. I understand that she’s a good girl, he’s a bad boy, and her father is a disgraced public servant. You don’t need to remind me of that every two seconds!

My second (and much bigger) problem was how unnecessarily gross most of the situations in the book were. I mean, the Lazy Gator (or whatever the bar she worked in was called) was an outright den of iniquity. The women’s only role there was apparently to screw the guys and keep their mouths shut otherwise. One of Holly’s old friends, Katelyn, is another bartender there, and her story is horrific. Apparently she had to have several instances of rough and degrading sounding sex—with guys who thought of her as no more than a piece of meat—just to get the job. And maybe Katelyn is fine with all that (she touts herself as “club property”) but I’m not.

Maybe if Katelyn was treated with a little more respect and seemed to be happy with her arrangement, I would be. But she’s more put there as a way to show how Holly is different. For some reason, Holly deserves respect from these animals. Screw. That. The guys in this book (including Holly’s dad and excluding Killian) are vile, masochistic, misogynistic baboons. The women are either pieces of ass who are treated poorly, pieces of ass who are treated slightly less poorly, or Holly.

You don’t need to have such extreme characters to show us how gritty this world is! Do it through your characterization, not through generalization. I just spent most of the book angry. It wasn’t exciting, like I think it was supposed to be. It was goddamn infuriating. The worst kind of flat characters are ones who slip into stale stereotypes like bimbo and pig. And, in my opinion, that’s just lazy storytelling. You wanna shock and awe your readers? Do it some other way.

I left those last two problems until the end because they’re big ones for me. I don’t use the word misogynistic very often. I’m not even totally sure how to spell it, and am straight up hitting spell check after I finish writing this to figure it out. That just goes to show how gross I found that element of the novel to be.

Apart from the meandering pace and the icky treatment of both men and women? It’s an aight book. But I’d be lying to myself if I said I could give it more than ⅖ stars.