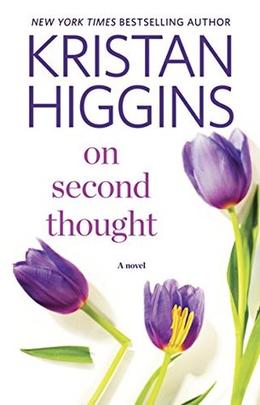 I’ve never read anything by Kristan Higgins before, and I’ll be honest—I totally judged this book by its cover. I thought it was going to be dull, soppy, and reek of the kind of floral aroma that you only get from books that are based in fictional small towns and feature the struggle of a woman (or two women) trying to carve a life for themselves in the wake of losing everything. I was wrong.

On Second Thought tells the story of two half-sisters, Kate and Ainsley. Kate’s husband (who she was with less than a year but loved more than anything) dies in the first chapter. Then, Ainsley’s boyfriend of 11 years breaks up with her and humiliates her by writing a blog post about it. The story is about their struggle to take these broken shards of their lives and cement them into something new and stronger. That means learning to forgive, to grieve, and to love again.

It’s been a long time since I last felt such an emotional connection to a novel. From the first chapter, it was like I’d been stitched into the story. I knew that Kate’s husband was going to die from the outset. I expected not to care. It wasn’t like I’d formed an emotional attachment to him before starting the book, and I doubted that I would do so over the course of one chapter. Again, I was wrong. I don’t know how she did it, but Higgins managed to make me grieve the loss of Nate like I had known him for longer than a few brief pages. And, more importantly, I empathized with Kate more than I expected to. She was living and breathing and so broken, and I hurt each time she did.

I was less connected to Ainsley, but I think that was because I was given Kate’s perspective first, and this included her perspective of her little sister. But she grew on me hard. Her boyfriend was a total idiot, so losing him wasn’t as sad to me as losing the charming, adorable Nate. But I still felt something for her, and I was happy to see them both eventually succeed.

That was the problem, though. The eventual part of them eventually succeeding. It was a long slog. Sure, I enjoyed reading the book and it wasn’t like I hated the whole middle section, but I felt like the promise of the premise wasn’t delivered upon until the last quarter or so. I know that healing takes time and this is more a book about being sisters and friends than it is about romance, but that’s where the book loses marks from me. That’s the only demerit, however, so if that’s not a problem for you, then have at ‘er.

With that out of the way, let’s talk the rest of the positives. It’s a long list. The characterization, first of all, was brilliant. Ainsley and Kate were different but both a pleasure to read, and they had such a diverse array of characters around them to keep things interesting. I never felt like any of the characters were stock. I also enjoyed getting a view of the different characters from the different perspectives of the sisters. You really get to see how the members of their family and the people surrounding them shaped them into the people they are, and I think that’s something you don’t necessarily get to see in many romance novels these days. (Though technically this leans more toward women’s fiction.)

The writing was witty and sharp. Though at times it felt like there was a lot of exposition going on and not a lot of action, I think it worked because of the introspective nature of the novel. It didn’t bore me, anyway. And I liked Kate and Ainsley, so I liked their internal monologues. I also like that it wasn’t fluffy and pink. There was swearing. There were tough themes. There was grit.

Normally I don’t enjoy books written in small towns because I feel authors tend to really pound out the “small town” vibe, to the point where I feel a bit claustrophobic. Cambry-on-Hudson is a little town I’d visit any day and not worry about wanting to claw my eyes out with boredom. The setting worked like a wonder, and I think people who enjoy small town romance will enjoy it too.

I wouldn’t qualify this as a nice, easy read. It is easy to read and it’s one that you’ll want to gobble up, but prepare to have some feels thrown at you. I’d definitely recommend reading it, and extra recommend reading it with a glass or two of wine at the end of a long day.