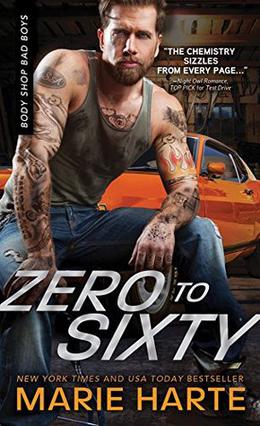 Sam Hamilton is a rough and tough mechanic, Ivy Stephens is a massage therapist, and Cookie is the little puppy that brings them together. I’ll be honest, I thought it sounded a little boring at first. Especially since I was expecting to face the familiar “gruff alpha bad boy” trope that seems to run rampant through romance these days. That’s not always a bad thing, but I feel like a lot of the time it’s done quite poorly.

But, lo and behold, something fresh this way comes!

Sam isn’t what I was expecting. He’s tough, he’s bad, but he’s also quite sensitive and sweet deep down. Though he won’t hesitate to end a conflict with fisticuffs, he doesn’t use his size and scary exterior to intimidate the heroine, which I thought was nice. There wasn’t the same kind of smoldering, aggravated sexual tension that these books often have, but what was there instead was light and refreshing. Cute and a bit fluffy. Or at least as fluffy as you can get with a behemoth of a man with lips like sin. Sam was a complicated character who wasn’t afraid to admit to himself what he felt. Lord knows the world needs more of that. As a side note, I chose not to picture Sam as the guy on the cover because, in my opinion, he looks like a serial killer.

As for Ivy… she was also there. I know she’s a massage therapist with a soft spot for animals, but other than that I couldn’t get much of a reading from her. I feel like most of her angst revolved around her having had relationship issues in the past. In my opinion, that’s kind of boring. It’s common in romance novels because it’s common in real life, but doesn’t it just kinda seem like one of those things you can throw into the novel pot without much extra effort? Anyway, I found her character a bit wish-washy overall.

The side characters, on the other hand, were pretty well developed. Mostly I’d say that’s because they’ve got their own books, but then there was Willie. This old lady is a hoot and a half. She is the lady Sam works with to rescue animals, and she’s got sass for days. I feel that Willie’s scenes added a smattering of color to the book, which otherwise suffers a little from a case of the blands.

I feel bad for finding it boring because I really wanted to like it! I was thrilled when I started to get Sam’s character and wanted to reinforce the value of having a bad boy hero who isn’t a caveman. And, I mean, I’m always down to read about an adorable dog. But the story just didn’t quite catch me. The series didn’t quite catch me. Sam is the roommate of Foley, who I guess had his own book and hooked up with his fiance, Cyn. And by “I guess” I mean “I know” because I read about it a lot in Zero to Sixty. There were even parts from Foley’s perspective. I get that if you’ve read the series and enjoyed it, these parts are supposed to be like little treats for you. But I tuned out like a broken radio.

All that being said, those are really quite minor complaints in the grand scheme of things. The writing was pretty good and I think there was a good balance of action and exposition. I think this is a world that the author has put a lot of time and thought into and it shows. The sex scenes were pretty hot considering that the rest of the book wasn’t, in my opinion, too spicy. Another thing that sets this book apart from other books about rough and tough bad boys is that the couple take things slow. Sam is all about consent and not crossing lines, which I thought was really sweet. He’s conscious of how scary he has the potential to be and makes sure Ivy’s comfortable with everything. Which is pretty cute when all is said and done, but might leave you wanting if you were expecting something a little raunchier.

I would definitely read more books by this author, but I’m not totally in love with the series. I think it’s the mechanic shop thing that’s not really doing it for me. But I like where this author has her head at I’d recommend this as a read if you’re looking to go off the beaten path a little while still staying...on the beaten path.