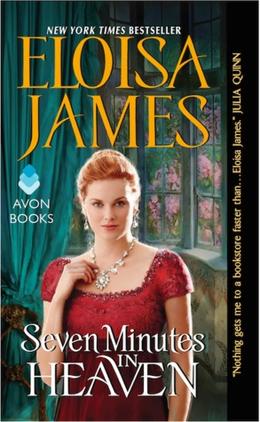 Eloisa James is an author whose books I always look forward to, and her newest novel, Seven Minutes in Heaven, the final installment of her Desperate Duchesses series, didn't disappoint.

The heroine, Eugenia Snowe, is a widowed wealthy peeress who both respects society and loves to break the rules that make it tick. Her governess staffing agency, her thirst for business in general, and her love of sweets form just a few her many layers, much like her complicated childhood. Even better: for once, a widow was allowed to both admit that her late husband had flaws but also that she still had a loving marriage with him, something all too rare in romance novels. Eugenia agrees to help Edward (Ward) Reeve with his new dependents, although not always entirely by choice.

I found Ward to be charming and straightforward for the most part, if a bit thick at times, and his relationship with his recently orphaned and extremely eccentric half-siblings, Lizzie and Otis, is one of the sweetest surrogate-father dynamics I've read. This heroine isn't having to melt the heart of the hero and teach him how to love, and I found that refreshing. Almost as refreshing is how openly and candidly the characters are about their desire for one another. There is no shame in their passion, which made it that much more appealing and joyful.

While there were a few supporting characters whose stories I would have appreciated being fleshed out a bit more, and a classic "can't you two just talk about that ONE THING and make everything better?!" plot point, Seven Minutes in Heaven is every bit as fluffy and delicious as one of Eugenia's teacakes, and just the sort of book I want to curl up with at this time of year.