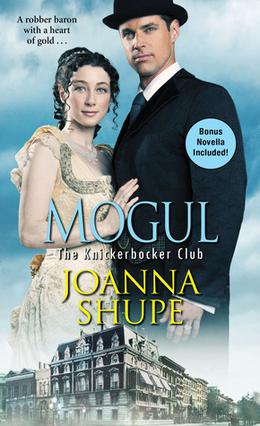 I’ve been hearing so much tell of this series, so I was excited to get a chance to review Mogul, the latest in The Knickerbocker Series by Johanna Shupe. I have greatly decreased my historical romance reading over the past year to focus on contemporaries, suspense, and other reading, so I was glad for the chance to turn my brain to the past. Especially delightful was that this is set in the U.S. and does not include any dukes!

The historical details, the dynamics of the jobs the h/h both have, the world they inhabit - all of that was lovely. I really enjoyed Shupe’s prose and how she constructed the world around them. There’s a whole subplot about discrimination around Chinese Americans and recent immigrants that felt very prescient in our times and there’s a part of me that would recommend this book just for that thread.

However, this is a romance blog and I’m asked to review romance novels and this just isn’t one I can recommend on that front. The official plot summary of the book tells us that Calvin is at the top of the social game, Lillian is a socialite whose brother goes missing. They know each other/”have a past” and Lillian goes to Calvin to help her find her brother. He is hesitant, as whatever happened in that past is a big deal, but agrees to come to her aid.

If that sounds intriguing, and you’d really like to read a book about the Gilded Age in New York, then this book may be for you. There’s certainly a lot of people who enjoy it - some reviews on other sites are glowing. It was not for me, however, and if you share some of my preferences, it may not be for you. Allow me to tell you three reasons why I can’t go with this book. Well, actually two real reasons and one silly reason that it just a pet peeve of mine.

First of all, the “past” is an elopement that was annulled through interference by Lillian’s father. Read “interference” as blackmail, by the way. Much like a lot else in this story, it’s all too much to go into here (there’s an accusation of a secret wife!), but my notes for this section read, “well, if they’re going to choose something else over each other, perhaps marriage wasn’t the right move right now anyway.”

When they meet again, the lust that their first marriage was built on is still strong. However, four years have past, and it does not appear that either of them have grown as people at all. I left completely unconvinced that another spell of blackmail wouldn’t fell their marriage again. I love a second chance romance, but that also means I’m a little picky about them. I have to believe that what tore them apart the first time won’t do it again, or I might as well just read a biography of Taylor and Burton.

Second, alluded to above, there is too damn much happening here. Elopment, annulment, missing brother, kidnapping, family legacy drama, geopolitical backdrops... it’s a ton to squeeze into a book. Especially a book that is actually less than the advertised 352 pages, as it contains a bonus novella! (My e-copy ended the main story to switch to the novella at 74%, by the way). It felt like the whole book was a written example of the improv comedy exercise “and then”, when characters have to respond to the previous activity by adding another activity of their own and saying “and then” in between. I knew about half-way through the book that it wasn’t going to resolve fully for me because there was just too much stuff to do!

Third, and this is the pet peeve not the real reason, so excuse me as I climb on my soapbox, but the cover of this one REALLY bugs me. Our heroine is described as looking nothing like the model on the cover. Our heroine is blond, the cover is brunette, our heroine is tall, the cover is seemingly not... I have read horror stories authors have of not being able to find models who look like their characters, but I find it hard to believe a tall blonde with a “womanesque” figure who is wealthy enough to wear well-tailored clothes would be a hard find for the publisher. Totally niggly, I know, and probably (?) out of Shupe’s control, but man. Irritates me.

The romance didn’t work for me, but the suspense of the kidnapping/disappearance plot was tight and fun. Additionally, I enjoyed the discussions of a part of history usually swept under the rug, which is why I rate this at 3.5 stars.