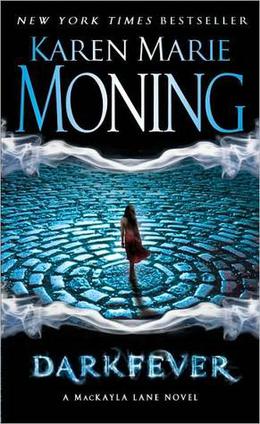 I'm late to the Fever series by Karen Marie Moning, having just picked up the first book, Darkfever, but that's the beauty of books: they're always waiting for you.

MacKayla Lane is a spoiled girl whose life changes the instant she discovers that her older sister was murdered while studying in Ireland. Mac travels to Ireland herself after hearing a voicemail her sister left mere hours before her murder, and what she discovers there is that everything she has assumed to be real about life no longer applies. After she's brushed off by the police and encounters unexpected threats, revealing depths to her sister's death and her life in the months leading up to it, Mac learns that there is far more at stake than simply her own vengeance. When a mysterious and sinister man named Jericho insists on being involved, Mac is left not knowing who to trust, or if she can even trust her own eyes anymore. The world of the supernatural has been revealed, making everything more complex and infinitely more terrifying. Now she has to figure out both who killed her sister and what she, herself, truly is.

The book is a bit of a slow burn, and I struggled initially to familiarize myself with some terminology. Mac is Elle Wood's bratty younger sister in many ways, and between her insistence on not wanting to be involved and her constant ominous foreshadowing, she got a little old at times. Still, as the book progressed, I finally saw hints of the badass heroine she could be, and the growing sexual tension between her and Jericho intrigued me.

Overall, while the book isn't my favorite, it definitely left me wanting to keep learning more of the story, which I consider a win.

New Releases Hour of the Witch by Chris Bohjalian Always Someone's Monster by Lani Lynn Vale
Pre-order now Forced Bonds by undefined The War of Two Queens by undefined
On Sale A Court of Fire and Metal : a Reverse Harem Fantasy Romance by Meg Xuemei X Smile Like You Mean It by Willow Hadley
Current Favorites Gravity by undefined Tis The Season To Be Naughty by undefined
Daily deals on bestselling romance books