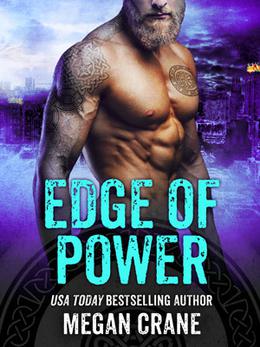 If you’re not familiar with Megan Crane’s Edge series, it can be a lot to take in. The books are set in a post-apocalyptic world that’s kinda the stuff of nightmares. My nightmares, at least. The storms came, the seas rose, and now the earth is a broken, haphazard place. In the western kingdoms, women are treated like literal dirt and sex is only for procreation—unless you’re a powerful man. The series focuses on the trials and tribulations of the raider kingdom—a.k.a. Dystopian Vikings—as they fight to cement their place in the world and defend the ones they love.

Edge of Power is the story of the raider king Wulf, which is one I’ve been waiting for for awhile now. The fact that he gets paired up with his arch-nemesis’ daughter, Kathlyn, was delightful. He’s hard and gruff and mean. She’s soft and sweet and naive. Together they’re kinda magical. It was what I would call an unconventional love story, with the sweet young thing pursuing the sex god (and even being rebuffed), and that made it extra interesting for me.

The first thing that will strike you about this series is the worldbuilding. Crane has done an excellent job of creating a deeply embedded world order that’s fairly easy to get the hang of. It helps that each book has sampled a different section of this world, rather than focusing only on raider life. This book gave us a look at royal life under a truly nasty king, and finally took Wulf out of his element and away from his people to give us a look at who he really is as a character.

And what a character. He’s exactly what I imagine a raider king would be—cocky, arrogant, but relatively levelheaded. So of course I’m in love. Kathlyn was the perfect princess, except for the rebellious streak that causes her to seek out Wulf once she hears he’s in her father’s castle. Even then, it takes some time before she stops toeing the party line, which is more believable than if she’d just been a straight up dissenter among her own people.

I felt the romance more in this book than I did with the previous ones in the series. Maybe it was just more my brand of romance. Maybe I just related better with Kathlyn than I did with previous heroines. Whatever the case, it pulled me in from the start. The sexual tension was off the charts and the steamy bits were definitely all that and a bag of potato chips.

The writing was good, but I find Crane’s over-descriptive style a bit exhausting sometimes. Conversations are spread out over so many pages that you end up forgetting what they were talking about in the first place. I don’t know about you, but my eyes end up naturally skipping over huge hunks of texts when that happens. Crane’s good at setting you in the right mood for the chapter, but not at keeping you there, if that makes sense.

This is about as far into the dystopian genre as I’m ever willing to go, so if you’re like me and not at ease in a dystopian climate, then you may still enjoy this. If dystopian is your bread and butter, then you need to get out there and read this book now.