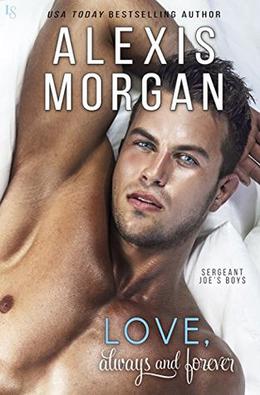 It all started with a fence.

Love, Always and Forever is the fourth book in Alexis Morgan’s “Sergeant Joe’s Boys” series. This one features Mikhail Wanjek and his perky and sexy new neighbor Amy Short.

Amy first meets this handsome man when she asks Mikhail’s permission to tear down his tattered fence so she can build a new one in anticipation of buying a puppy. The fence is a perfect metaphor for the direction of their relationship.

The book weaves us along in their developing “friendship” and we begin to watch as Mikhail and Amy try to create a relationship. When you think their getting close, either one or another erect an emotional fence to keep the other out the deepest secrets of their hearts.

Mikhail has a complicated and dark past, including a biological mother who died of an overdose when he was a youngster. He blames himself for his mother’s death, rationalizing that had he not gone to school that day, she would still be alive.

He’s also battling Post Traumatic Stress Disorder from his tours in Afghanistan. On top of that, he is now a fire fighter who mourns when he can’t save the lives of all involved in the blazes. He refuses to let anyone close enough to help him deal with these issues – not even his adoptive mother and his brothers.

Amy is getting perilously close to tearing down the fence, but he’s uncertain that she would like the man she finds. And the truth be known, he’s unsure about discovering his own heart after it being fenced off for so long.

Despite appearances, Amy is waging her own emotional war. After years of living under her family’s suffocating but well-intended grip on her every move, she finally moves out on her own. During most of her life, she had suffered from a serious health condition. Now, her health has improved but her family’s concern is still there and she feels stifled by their need to continue their hovering over her.

More than that, Amy knows Mikhail deserves to know the truth about her past, but she’s afraid that he may not want a relationship with someone whose health could suddenly be in jeopardy.

If you’ve read Morgan’s first three books in the series then you’ll be pleased that his brothers play a good supporting cast to his starring role in this book. If you haven’t read the other three books, you can still read this one without getting lost.

The book is an easy and enjoyable read, though, the first quarter or so of the story seemed to drag. Once you get past that, you’ll find yourself talking to the characters trying to get them together or to get them to listen to their siblings.

Morgan is a talented writer who, with a slight turn of the phrase, is capable of showing the intensity of love involved in various relationships. This amazing ability makes it that much easier not only to fall in love with Mikhail and Amy as well as Mikhail’s entire family.

Even when we peek into Amy’s family we can easily see how much they love her and the concern they have for her health. You’re ready to forgive them and you hope Amy can give them another chance before she cuts them out of her live totally.

Oh, yes. We mustn’t forget the real stars of the book, Amy’s puppy named Panda and Mikhail’s dog he fell in love with and bought, Sarge. You’re sure to smile every time you read about them.

And to think, it all started with a fence.