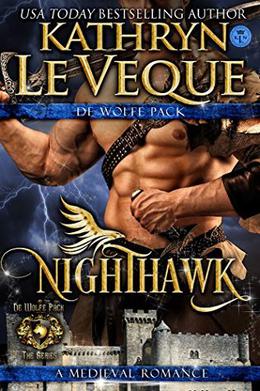 Nighthawk, by best-selling author Kathryn Le Veque, is the first book of hers that I have read. Unfortunately, I don't see myself reading any more of them now.

Patrick de Wolfe is a renowned medieval English warrior who rescues Brighton “Bridey” de Favereux from a group of Scots one night and falls in love with her once he sees how beautiful she is. When he discovers her parentage and the fact that she is being hunted by a brutal maniac, he sets aside his own plans and ambitions for the future in order to keep her safe.

While the story itself isn't bad, and is clearly well researched, it is predictable in the extreme. The heroine is shy, naive, has a charming stutter, is gorgeous beyond belief, and manages to be both tiny and have a perfect body. The handsome hero is twice her size in every way (yes, that point is brought up often, including when they're about to have sex). The story is full of detail, but often the amount of detail was distracting and made me think that something important was going to come of a particular action. It never did.

Although the book says it can be read as a standalone, I think that reading the others first might have helped me enjoy it more, mainly because the women that Bridey interacts with have so much more fire and backbone than she does at any point in the story.

Nighthawk has so far received great reviews, and for fans of Kathryn Le Veque, I'm sure this will be loved, but newcomers should start from the first in the series.