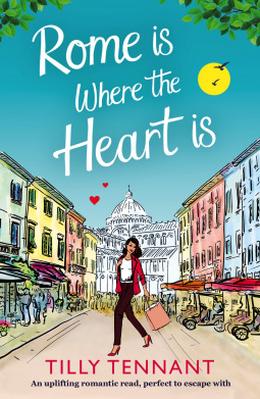 I was excited to read this book because it’s set in Rome and I thought it would make for a nice bit of escapism a la Eat, Pray, Love. I’m sad to say I didn’t quite get that vibe.

Rome is Where the Heart is tells the story of Kate, recently divorced and trying to figure out her way in the world. She decides to go on vacation to Rome to add a little bit of spice to a life that had been—while married—a little boring. While in the ancient city, she meets Jamie (an American and her new bestie) and Alessandro, a sexy Roman police officer.

I think the thing that ultimately led to disappointment in this book was that it read like the author wrote it according to a formula. And by that I mean it was a groan-inducing level of predictable. Probably one of the most tense moments in the narrative (when Jamie gets beat up) was totally ruined by the fact that everyone was too dumb to figure out who had done it. When Jamie revealed his attacker later on, Kate was surprised. Girl, it was obvious.

I know, I know—chick-lit isn’t meant to be groundbreaking material. It’s meant to make you feel good. But there was something about this book I just wasn’t getting. The writing was fine, but the plot and characters were quite bland. I felt like the stakes could have been made a little higher, because as it was I wasn’t emotionally invested in what happened to Kate in the end. And the romance could have been a bit hotter. Even though it was technically a “clean” romance, there were tons of opportunity for some wholesome spice that weren’t capitalized on.

On the whole, the romance was kind of...uninspiring. I understand that Kate only had a week to fall in love with the guy, but it seemed like they were gaga over each other almost right from the beginning, which is all fine and good except it’s boring as hell. I’m not an insta-love person, and I’m not convinced the relationship would have appealed to me even if I was. Almost zero of the conflict came from the relationship itself. Rather than Kate having a hard time adjusting to being with a new man after having been only with one for the past dozen years or so, she’s ready to go all in almost immediately. Conflict, instead, comes from tons of little subplots that are about as intriguing as a speck of dust on a computer monitor.

I guess my main feeling coming out of this book is a sense of “blah”. It wasn’t bad, but I definitely won’t be tossing it at strangers on the street or proclaiming my love for it from the rooftops. I have another Tillie Tennant book in my TBR pile, but now I’m not sure whether I still want to read it. If you’re looking for something easy and uncomplicated, however, this might just be your jam.