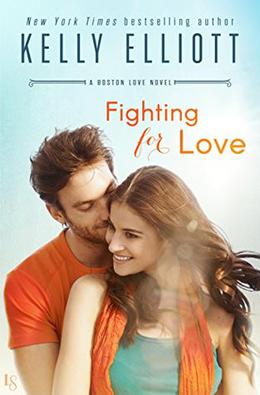 Finn asked Rory, “What made you fall in love with me?”

“You fell asleep at a union meeting wile my father was talking. How could I resist that? And you had a dog.”

Rory then asked him, “What made you fall in love with me?”

“That’s easy. It was when you gagged at the sight of my blood.”

You’d think after you read Fighting for Love, Book 2 of the Boston Love Series, that Kelly Elliot is part writer and part alchemist by the way she transforms the mundane events of life into magical romantic memories.

If you feel hesitant in reading this romance because you haven’t yet read the first in this series, put those worries aside. You don’t have to in order to thoroughly enjoy this one. (But, once you read Fighting for Love, you may find yourself reaching for the first book.)

The moment you begin reading, you’ll fall in love with Finn Ward, a Boston firefighter and Rory Adams, a lawyer whose father is Finn’s boss.

All it takes is one look at Rory and Finn knows that his days of playing the field are history. Rory is a lawyer for the firm representing the firefighters’ union and falls in love herself the moment she sees him. But she knows if a relationship should develop, it won’t be easy to maintain. Her father has forbidden her to date firefighters. Period.

What she doesn’t realize is the Finn is high on his list of men who are off limits. He carries a grudge against him that surfaces even in his and Finn’s daily encounters. But no one, neither Finn nor his closest friends, knows why.

Up until the moment she meets Finn, her life has been nothing but preparing for the future: Harvard Law School followed by joining her mother’s prestigious law firm.

You would think that once she has a secure job, she could relax a bit, but she only works all the harder, out to prove that her appointment was more than nepotism. She’s determined to prove to her colleagues as well as her mother she’s a talented and successful lawyer in her own right.

Despite all of these complications, Rory and Finn enter into a relationship of a magnitude that neither of them imagined would be possible. Despite their bliss, Rory fears the consequences they both would face should her father discover they were a couple.

Elliot has crafted the perfect romance novel. You’ll immediately fall in love with Finn. And you’ll wish you had a sister or best friend with Rory’s uninhibited personality and her engaging sense of humor.

Elliot understands the importance of cadence in storytelling and writing. Her choice of words and presentation of interaction of all the characters is superb. She has perfect timing in her use of humor.

All of these elements combine to create a sweet and sexy romance you can’t tear yourself from.

But most telling, you know that Elliot isn’t just narrating a love story, she’s living it right along with Finn and Rory. And you’ll be all the richer for it.