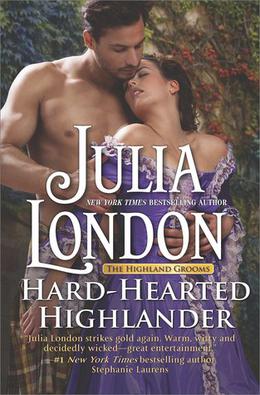 You know, I don’t think I’ve ever read a historical romance set in the Highlands before. I definitely haven’t read one where the governess of the hero’s intended gets the guy in the end. And considering there’s a lot riding on Rabbie Mackenzie’s marriage to little Avaline, his shifting in attention to the heroine, Bernadette Kent, makes for a compelling story.

And then Bernadette catches Rabbie’s eye, and Rabbie catches Bernadette’s eye, and well it all kinda turns into a panty-melting maelstrom from there. Both of them have a tortured past, complete with past loves who were taken from them against their will. Honestly, their situations are almost too congruous. They are perfectly suited for each other in every way, and watching them discover this was wonderful.

As characters, Rabbie and Bernadette mostly hit the mark. I wouldn’t say I found any of the characters to be wooden or unbelievable, but I didn’t really jive with any of them either. I could see why Rabbie was swoon-worthy, but he was a little too tortured for my taste. I liked Bernadette a lot more, though found her to be missing...something. Don’t know what it was, hence cannot deduct marks.

This is a slow burn with lots of other plot points going on that don’t have anything to do with the romance. I understand that in order for the hero and heroine to be together they’ve got to jump through some hoops, but I got bored at times. It fit with the tone of the novel though, so I wouldn’t say it was a bad thing. If you’re in the mood for something slower and laden with emotion, this right here is where you need to be.

The writing was beautiful and very evocative. I felt like I was in Scotland, which I mean is all I’ve ever really wanted. There was a good balance of action and description, so I found it easy and pleasant to read. And when the lovin’ came...damn, it was good. Real good. Worth the wait, I’d say.

Imagine you’re on a stormy cliff in the Highlands of Scotland, wind and rain whipping at your face. The sea below is crashing against the rocks, chaotic and wild as the all the emotions you hold deep in your chest. Now, if that sounds rockin’ to you, you’re gonna love this book. If you want something a little lighter (or warmer) then maybe put this one on your to-read shelf for later.

The Big Girl's Guide to Buying Lingerie by Amie Stuart

'Y’all I wanted to love this book so much but there was too much going on and it all ended up feeling like a caricature instead of characters...'- Kristen D

'Mister Moneybags is humorous, tender, sweet and at times sorrowful - and when you believe the couple has been through it all, one final obstacle towers in front of them – one that may end it all...'- Terry

'How delighted was I to discover that this book wasn’t just something to pass the time, but a book I genuinely loved...'- Kristen D

'You’d think that Kelly Elliot is part writer and part alchemist by the way she transforms the mundane events of life into magical romantic memories...'- Terry