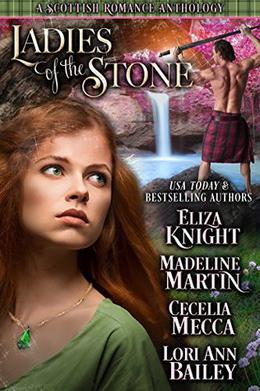 Ladies of the Stone

From within the soul of a special stone, the embodiment of the heart of Scotland, a protector is selected. A woman with a pure heart and the ferocity of a warrior. Each with a special mark and powers . Each with an Evil force determine to obtain the stone for their purposes. These are their stories...

The Highlander’s Quest by Eliza Knight. 1329 Scottish Highlands. Lady Julianna Sutherland was taking over the duties from her mother of guarding the new king. A lad recently entitled due to the death of his father. Going to protect the young lad she met Alistair Campbell who guarded the Earl of Moray and the young king. Little did he know, when Julia arrived she was to take over the job. Dark forces were at hand and the king is taken. Can Julian and Alistar save him? Can Julia find the stone that will give her the power? An exciting adventure which explains a lot about the mythical legend and puts the two into each other’s paths that may lead to passion and true love

Cassandra by Madeline Martin. Durham England 1086. Cassandra, daughter of the Special Beaumont Bloodlines was born with the power granted only to the last born daughter of each generation. Magic. It took time for her to find the stone that would bring her the power she needed. But she also found Fergus, the Undefeated with power of his own searching for the stone to bargain for a life with it’s possession. A story wrought with magic of life and strength that brought two people together. But would it also tear them apart? What a wonderful tale that will grab you from the first and not let go until the journey ends.

The Protector by Cecelia Mecca. Isle of Skye Scotland 1273. Can two enemies overcome their feelings of hatred to come together? A man driven, William, Lord of Camburg who went by Cort, was determined to reach his goal of the top of the mountain. He only knew he was being drawn. Finding the stone he was making he way back home. But Lady Marion had the same goal. She had been deemed keeper of the stone so she caught up with Cort and demanded he return the stone. This was a wonderful story by Cecelia Mecca that continued a secondary character from one of the first books in her Border Series. Two people fated to be together with different goals for the power of the stone. But were they really ? The interaction between Cort and Marion was heartwarming and the story had a couple of surprises that kept me turning the pages! This was a great addition to this collection!

The Highland Guard and His Lady by Lori Ann Bailey. Protector Lady Leslee MacKinnon is in Edinburgh at the home of Queen Mary, helping to translate a large tome for the Queen. Captain Duncan Douglas, a distant cousin the Queen Mary's husband Henry, guards their son, Prince James. When the two run into each other, Duncan helps Leslee find her way in the castle. As he spends more time with her his attraction to her builds as does Leslee with him. But she is the keeper of the stone to save Scotland and has many more abilities that cut her off from others. But evil forces are at hand that want the stone and will kill her to get it. Can Duncan keep her safe? Will he be like the others and call her a witch for her special skills ? I truly loved this story. Two souls who really needed each other so very much and the journey that brings them together.

I was so disappointed when I turned the last page. These stories had me enthralled with such a different storyline with each of these amazing authors working together to create. The fight between the good of the stone and the evil of those who wanted to take it away. Each hero and heroine tugged at my heart and had me under their spell. All I can say is Well Done!!! Do more together!!!

'Christina McKnight is able to engage the reader from the beginning of this story and not let go until the last page...'- Lori dykes

'Godspeed will sweep you away into 1215 Medieval England, where knights battle for dominance for their King and are loyal to their leaders...'- Lori dykes

The Rush by Rachel Higginson

'Oh. WOW. I mean WOW. On reading about four pages I was instantly hooked on this story. There are so many ways that this is perfectly written. Let me count the ways...'- Eljoneswilder

The Sins of Lord Lockwood by Meredith Duran

'An Emotionally gripping story, The Sins of Lord Lockwood held me hostage until the last page was turned...'- Lori dykes

'There Is No HEA This starts out as an amazing story of brotherhood, infatuation that turns into true love, and ends like a tragic Romeo & Juliet love story..'- Dreamlisy

'God Damn It! So this book was really great, and fun. I didn’t think I would like it, but I did and every time I come back to this author, her writing and story telling just gets better and better...'- Dreamlisy