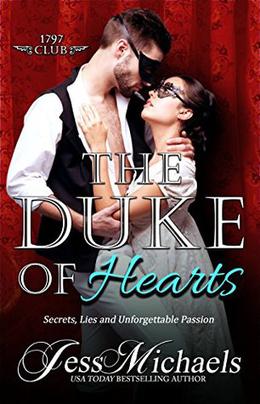 Another story by Jess Michaels to grab the heart. The hero, Matthew Cornwallis, Duke of Tydale has been despondent ever since his fiance Angelica Winter died in what he felt like was his fault. His friends at the 1797 club have been trying to get him back out into the world and he agrees to go to the Donville Masquerade with his friend Robert. Encountering a lady being accosted, he rescues her and they share a kiss. Isabel Hayes has been married once to a man with no passion in their union. Meeting Matthew for a second time brings them together and they become lovers. But she soon realizes that he was the man engaged to her cousin Angelica and has only heard from her uncle how he caused the death of his daughter. It seems a fated meeting, as can often be the case and she wants to believe Matthew is innocent, but when he finds out who she is, the story takes a turn. Can the real truth come out and can Matthew forgive himself and the two find happiness? I loved this story of Matthew and Isabel, both so deserving of happiness and love. Although part of a series, this can be read as a standalone, but I encourage you to read them all!!

Her Stepbrothers' Demands by Trinity Blacio

'Jasmine's whole life has just been turned upside down. She walks in on her mother being turn into a wolf. She never knew that her stepfather was a shifter for her entire life...'- Shyalwayz

Fix It Up by Jessica Gadziala

'If you are in the market for a bit of wholesome reading, check out Jessica Gadziala latest book! 'Fix It Up' is cute, funny, sexy and everything you might want from a classic enemies-to-lovers...'- Marie

Forbidden Vow by Diana Cos

'#3 in Diana Cosby's intriguing "Forbidden" series, it can be read as a stand alone..'- Tarenn98

Another One by Aleatha Romig

'I really enjoy what Aleatha Romig is doing with her 'Lighter Ones' series...'- Marie

The Wicked Wyckerly by Patricia Rice

Worth the Risk by K. Bromberg

'A really adorable & funny & sexy small-town single-dad falls for the rich city girl love story! Worth the Risk is passion peppered with angst - a struggle for love against the odds - and...'- Marie