A Kiss To Build a Dream On by Jolie St. Amant 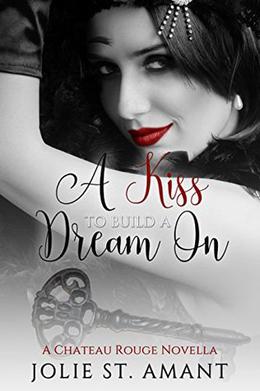 A Kiss to Build a Dream On by Jolie St. Amant was a fast, sweet, entertaining read.

This was first time reading a book by this author as well in this series. When I say it was a quick read, I mean it clocks in at 83 pages, so less then a hour reading. It's a perfect little book for a lazy afternoon, beach, or even work commute.

Lets get into this, I will say that this book wasn't as solid as I would have liked it to be, it felt a little choppy in places. Not so much between the hotel staff, they were sleek and mysterious, but when Chloe enter the picture. Don't get me wrong she had a strong opening, it was just, she was a bit all over the place. Her and Jared's romance was for me, felt forced at the start. I did warm up to them towards then end, but their meeting and, just him being her old high school friend/nerd.. just didn't sit well with me.(Not that he was that, it was, I don't know, I wish his appearance wouldn't have been the polder opposite of what he was then.) This would also be because there wasn't much meat to the actual plot.

As for the plot, I did like it. Chloe is trying to find herself after years of being under her ex-husbands thumb. I liked her drive, and the power I felt from her when she walked away form that asshat. As for said ex, there is a scene at the end where karma gets him, I just wish that scene was showcased, it was still creepy, but I just wanted a little more.

I think half my problem with this short was that it was just that, too short. There wasn't enough time for me to connect with the MC's. Which is weird because the Hotel staff, I felt a connection to them. Maybe because they are featured in the other books, and the author has has more time to develop and write about them. I think a full length novel about them, and their hotel would be freaking outstanding.

Overall this wasn't a bad read, I very much enjoyed myself. There are so eye roll moments, I mean, cheese, holy hell there are some cheesy moments.. but guess what? I love the cheese! A guilty pleasure of mine, and this book, even though I wasn't sucked in as much as I wanted, still had me hooked. There was this, easy to it, a mystery and it felt smoky.. like a old speakeasy.

So please Ttke my high recommendation that you will enjoy this snap of a read, with all the passion, glitter and magic that is New Orleans.

'I received an ARC via Netgalley in exchange for an honest review Oh WOW, I really loved this book...'- Sjones70

'I Think I Liked It? The humor was great, and while I didn’t like Horse, (too bossy and controlling for my taste), I looooved Marie and her love for her brother, and the love that grew from learning...'- Dreamlisy

'Stand and Deliver by Rhenna Morgan is a sexy Contemporary Romance. #5 in the "Men of Haven" series, but can be read as a stand alone. Beckett Tate had been waiting for Gia Sinclair for three years..'- Tarenn98

Making Up by Lucy Parker

'Lucy Parker became an instant favourite after I fell in love with the first book of her London Celebrity series. The third book, Making Up, is another winner for me...'- Marie

The Midnight Hunt by L.L. Raand

'All The Lesbians! Lesbian Werewolves, Lesbian Vampires, god, I just love lesbian anything! The narrator was fantastic, always love her readings and all the voices she can do, and god was she pushed...'- Dreamlisy

'Another story by Jess Michaels to grab the heart. The hero, Matthew Cornwallis, Duke of Tydale has been despondent ever since his fiance Angelica Winter died in what he felt like was his fault..'- Lori dykes