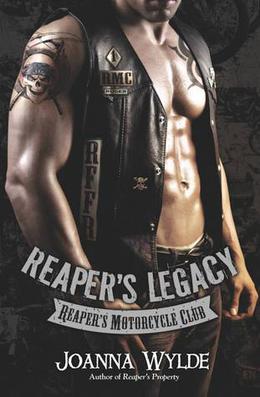 As can be seen, I have read the next book in this series, and I must say that I actually liked it far more then the first book. The story has more world building, we get to meet/see more of the old ladies again, (which is always a treat for me) and while Sophie was again, another young woman who didn't understand club life, her story, was far more intriguing then Marie's.

Sophie is a single 23 year old mother trying to support herself and her little boy Noah, and as a result, I found myself understanding her better, siding with her on certain things when she argued with Ruger, and when it finally came time for her to cut him off from her romantically, I completely understood why. Now, to have me be so invested with a single parent story where their life revolves so completely around their small child, as well as the hero's, the story has to be quite good and the child believable. And as such, Wylde delivers both with the lasso of feelings, never missing a beat with the intriguing back and forth that Sophie and Ruger go through.

The only critiquing I can think of that was something I could have done without, was Ruger---'s assholeness. (is that a word cause it feels like one)

Other then that, I like how we are basically psyched into believing that the first Big conflict was going to be it for the book, when omg! Surprise! Murder happens. When that happened, I was so blown away and surprised, because I had thought the ex was a past plot point used to introduce Ruger and Sophie into one another's lives, and then that was the end of him. But boy oh boy was I sourly mistaken, and as such, was just as surprised as Sophie when he showed up again. Therefore bringing them all full circle, (full triangle??) once again...

Man this book was a rollercoaster of emotions, as Sophie tried to figure herself out, where she belonged in this new world, where Noah belonged, and how best to protect him, and where she stood with Ruger. So I must say, if high emotions, foul mouthed, rude bikers and the back and forth of lust is your cup of tea, look no further.

Belleza and the Brute by Jane Matisse

'Belleza and the Brute by Jane Matisse was a okay read that was for me, not so much a hit or miss.. just okay...'- Eawalsh

'Plot Twist (Romance in Rehoboth #3) by K.L. Montgomery was feel good read, that puts a spin on the normal romance female MC...'- Eawalsh

Resisting the Rancher by Kadie Scott

'Resisting the Rancher (Hills of Texas #2) by Kadie Scott was a good feel, frustrating, outstanding read that had me hooked from start to finish...'- Eawalsh

A Kiss To Build a Dream On by Jolie St. Amant

'A Kiss to Build a Dream On by Jolie St. Amant was a fast, sweet, entertaining read. This was first time reading a book by this author as well in this series...'- Eawalsh

'I received an ARC via Netgalley in exchange for an honest review Oh WOW, I really loved this book...'- Sjones70

'I Think I Liked It? The humor was great, and while I didn’t like Horse, (too bossy and controlling for my taste), I looooved Marie and her love for her brother, and the love that grew from learning...'- Dreamlisy