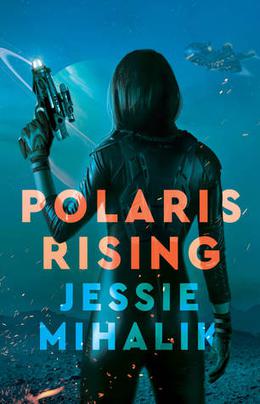 Polaris Rising is a highly enjoyable space opera romp that kicks off full speed and then just keeps on going. The story has everything: A highly capable runaway princess! A dangerous outlaw who wears his tight shirts very well! The titular space ship that hides a secret! Secondary characters who are possible allies but maybe not! Political intrigue! And family drama! The world building is done expertly. Big ideas and small details create together a captivating and convincing universe that I enjoyed spending time in and am looking forward to getting to know more in future books. Sonic showers, space gates, nanobots - this book is a serious science fiction effort. If you love epic adventures, give this book a go! As a space adventure, I would give 'Polaris Rising' full marks. It is the romance part which left me a bit unsatisfied though. The story is told from Ada’s point of view which I very much enjoyed. This is a heroine worthy to lead a ragtag group of outlaws, tricksters, and smugglers trying to stay ahead of some of the most powerful people in the universe. However, the focus on the heroine left little time for the hero and little for the reader to fall in love with. A bit of a mystery for the better part of the book, Loch is very much a typical romance book alpha male: Tall, muscular, gruff, overbearing, likes to be in control, prone to both jealousy and hardening body parts. Perfectly adequate, there is just very little that makes him special. It's not that I did not like the pairing. This is a couple perfectly suited to each other. As one would expect, Loch is highly capable: Be it flying spaceships, brawling, military strategy or using his hardening body parts to great effect. However, Ada is no princess who needs rescuing, she is calculating, immensely well prepared and really knows her way around anything tech. Too often, romance books feature heroes who are so powerful that you end up just satisfied if the heroine does not get in the way. In Polaris Rising both Ada and Loch have their areas of expertise and complement each other well. Theirs is a true team effort. However, as a reader, I never fully connected with their love story - it never became clear why and when they fell for each other. Though not necessarily for the romance, I highly recommend this book to anyone who enjoys a good world building effort coupled with some serious adventure time!

'This Dragonfire romance takes readers to Hawaii where they become caught up in spine chilling exploits and flames of passion...'- Stormyvixen

Heart of Stone by C.E. Murphy

'This is the best blend of world building, use of mythology, mystery, and politics I have ever read...'- Dreamlisy

'It’s weird, because I adored the first book of this series, and while I liked the beginning of Liz’s story, after the whole forcing the cootie on her (literally forced, her Barbarian Dickhead, as...'- Dreamlisy